Chester A. Moore’s turnaround plan will now be under district management

Chester A. Moore’s turnaround plan will now be under district management 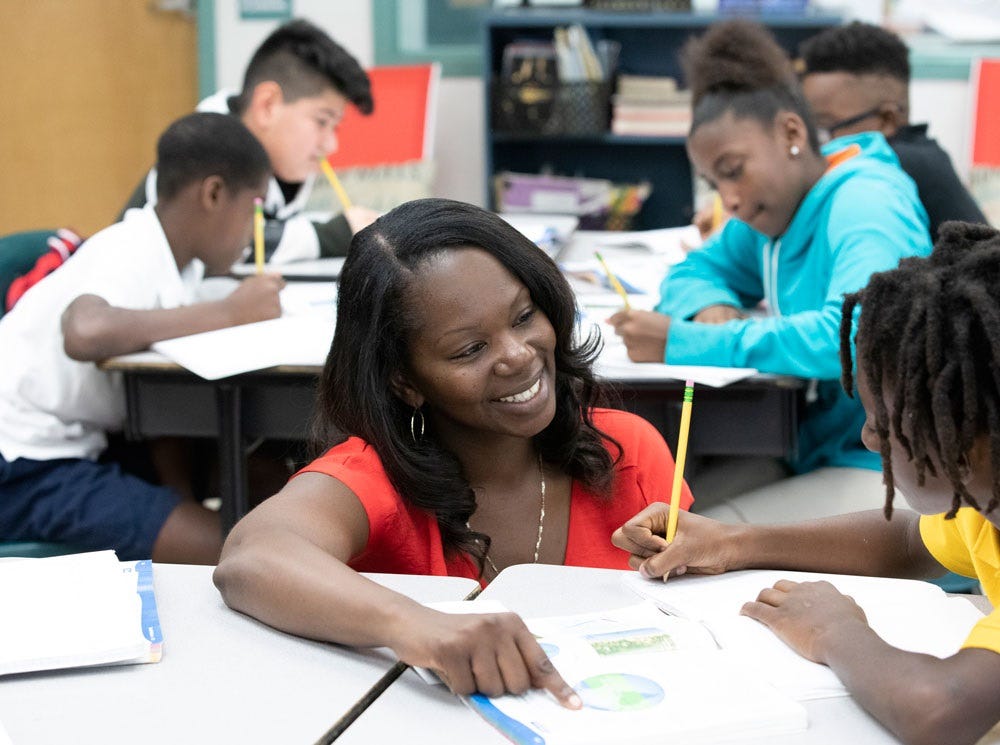 IRSC graduate Nikki Hart thrives as a fifth-grade science teacher at Chester A. Moore Elementary in Fort Pierce. The district recently took over the school’s turnaround plan after the school failed to get a C grade. (Photo: Molly Bartels)

The school implemented its own turnaround plan for 2018-19, when the St. Lucie County School District first was notified it needed to improve its scores, but the plan was managed by officials at the elementary school.

A turnaround plan is required for a school that fails to earn at least a C grade from the state for three consecutive years.

Chester A. Moore, one of 23 schools across Florida, and the lone campus on the Treasure Coast, required to implement a turnaround plan, earned a D grade for two consecutive years, according to the state Department of Education.

Letter grades are based on Florida Standards Assessments test scores and learning gains that measure how students have improved over time.

The State Board of Education approved the updated, district-managed turnaround plan earlier this month. Chief Academic Officer Helen Wild said she is optimistic about the school’s future.

“This is something we’re successful with,” Wild said. “We have a history of moving schools out of turnaround.”

More: St. Lucie County could get its second charter high school in 2021-22

Part of the challenge to improving low-scoring schools is building early literacy skills,  Wild said, so there will be a greater emphasis on early elementary grades to build those abilities.

As such, despite the improvements seen on English Language Arts test scores for the 2018-19 year, K-2 reading and writing classes will continue to be a focal point for the school — and the district — moving forward, she said.

Additional improvements to the plan include a focus on fourth- and fifth-grade math, Wild said, and ensuring teachers have the support they need in both understanding the material and ensuring students are improving.

Across the district, but especially at turnaround schools, teachers are encouraged to engage in collaborative planning, or working together to develop lesson plans, for example.

When teachers collaborate, Wild said, they have a deepened understanding of the lessons they are teaching.

More: For St. Lucie ESE teacher, it’s more than just a job; her students are her family

More: IRSC President Massey shares his ‘secret’ to college’s success as he retires after 31 years

“When you support collaborate planning, your ultimate goal is that teachers continue that cycle even when they aren’t having district support,” Wild said.

Aside from changes to how lessons are planned and taught, the turnaround plan includes paying more attention to individual student data in order to make changes as needed. One way of doing that, Wild said, is looking at Power BI data — a progress-tracking system that logs grades, absenteeism and discipline — and how the district analyzes achievement data.

The district also used FSA data as a component of teacher recruitment and placement as well as curriculum and instruction for the 2019-20 school year, according to the turnaround plan.

Chester A. Moore isn’t the first St. Lucie schoolto find itself under a turnaround plan. Weatherbee and St. Lucie elementaries, Samuel S. Gains Academy of Emerging Technologies and Dan McCarty Middle School have been under school-improvement plans in recent years, according to Wild.

But, she said, working through a turnaround plan and making improvements as a school can be a positive experience for both teachers and students.

Once teachers and students see that they can do it and experience high levels of success, she said, “it does cause that positive culture to keep it going and to believe in themselves.”

More: Would students benefit from mental-health days off from school? Reaction to bill is mixed