Wheat procurement after middle of April, no word from FCI

Dachser announces Executive Board for the future

Australia is gearing up to host the world-leading Chapman Phytosanitary Irradiation Forum, in Melbourne next month.

It is the only global gathering for all phytosanitary irradiation stakeholders, and a representative of the local hosts, Steritech says a range of growers, researchers, exporters and service and technology providers will be in attendance.

“It’s a tremendous opportunity whether you are in the Australian industry or global industry to attend this event,” Steritech’s Fresh Produce Business Manager, Ben Reilly said. “It’s a great chance to meet many of the industry experts that have been working within the industry for decades. It’s a great opportunity, while the industry is still small enough to fit into one room, to meet everyone as it continues to grow.”

The event is a joint partnership between Chapman University, International Irradiation Association (IIA), and the International Atomic Energy Agency (IAEA), and Steritech is a Diamond Sponsor.

Anuradha Prakash, from Chapman University, says there have been two objectives since its inception in 2010.

“The first, to increase understanding and use of irradiation as a phytosanitary treatment to enhance global trade and prevent invasive pests,” she said. “The second, to foster dialogue between traders from different countries.” 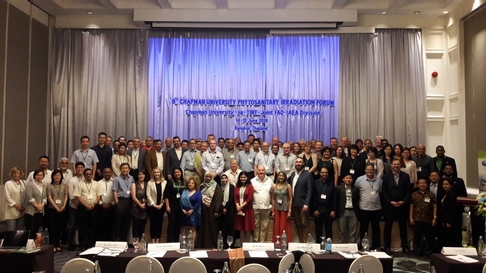 Last year in Thailand, there were 110 attendees from 30 countries, to learn about the benefits and opportunities for growing fresh produce trade. The 9th Chapman Phytosanitary Irradiation Forum is again expected to be well represented.

“It’s incredibly valuable for global development,” Mr Reilly said. “We had people from North-East Asia, South-East Asia, Australia, New Zealand, United States, Europe, Central America and this year we are expecting South America to join. There will be researchers from China and Japan, and it is really about the betterment of phytosanitary irradiation for the benefit of international multilateral trade, and environmentally-friendly solutions for biosecurity controls.”

He added that Australia’s exports have been growing at a rate higher than 25 per cent per annum, for the past four years, so growth is significant.

“That’s a natural growth in existing markets as well as new markets,” Mr Reilly said. “We are seeing increasing acceptance of phytosanitary irradiation globally, recognising its benefits and reliability for the regulator, and its commercial benefits with quality and shelf-life through the cold-chain friendly process.”

The forum will coincide with a tour of Steritech’s second fresh produce irradiation facility, which opened in January. Mr Reilly says it has proven to be a huge success in the few weeks that it has been operational.

“It has been feeding exports to New Zealand,” he said. “Retailers have commented that the shelf-life and quality of the fruit have been excellent. We have treated over 600 tonnes in the first six weeks of the programme. What is exciting is that it is being used in conjunction with a six-day sea freight voyage to deliver high volumes of the freshest table grapes. On average it is 10 days fresher than the cold disinfestation pathway.”

Mr Reilly says there are currently a number of protocols under negotiation phase that will use irradiation into significant South-East Asia markets.

“We constantly aspire to work with North Asian trade partners to ensure this technology works to benefits two-way trade between our nations,” he said. “We are also supportive of multilateral arrangements that not just see the benefits between Australia and our trade partner, but also their broader trade partners. So, there are greater export opportunities for everyone. We are focused on bringing security and consistency to trade and biosecurity alike, by offering a simpler broad-spectrum solution for all fruits and insects.”

For more information, and to book tickets, visit: www.chapmanpiforum.com