Rates hold steady as shippers prioritise getting exports to market

$2,000 in inventory stolen from local CVS

Rates hold steady as shippers prioritise getting exports to market 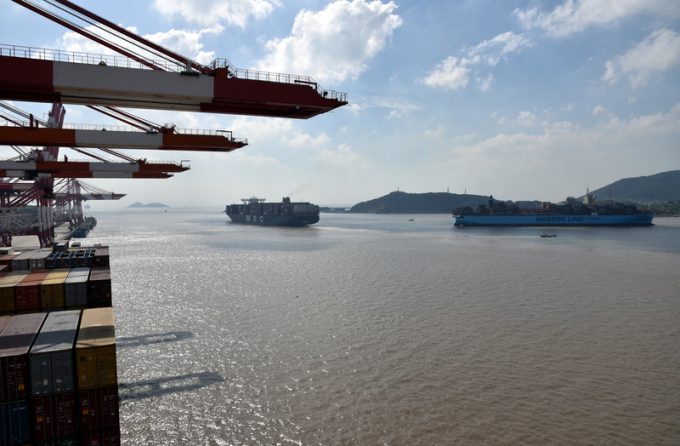 Despite continued weak demand, the comprehensive index of the Shanghai Containerized Freight Index (SCFI) edged down just 1.3% this week, with the US west coast component actually recording a gain.

This provides further evidence that, for now at least, rates are less important to shippers desperate to get their exports to market.

Manufacturing in China is slowly recovering from the coronavirus outbreak lockdowns, although container transport is still reported as “scarce and expensive”, meaning = intermodal movements are unreliable.

According to a Drewry analysis, ocean carriers cancelled 105 sailings from Asia to Europe and Asia to the US this month, with the ships that have sailed departing with very poor utilisation levels.

Notwithstanding the revenue lost on well over 1m of teu by carriers due to the blanked sailings, the voyage losses recorded on the vessels that have been sailing are likely to be high.

In order to mitigate the losses, container lines are rolling out FAK and GRI increases for 1 April, by when they hope the tens of thousands of containers with pent up orders will be working through to ports.

And The Loadstar heard this week of more ambitious plans by one carrier for an FAK rate of $3,000 from 1 April, backed by a guarantee of shipment.

Moreover, on backhaul trades to China, there are reports of severe shortages of equipment and boxes being stranded on the quay for weeks in certain cases awaiting a nominated loader.

Many carriers have added to the misery by imposing what they describe as “peak season surcharges” on backhaul lanes. CMA CMG today announced a PSS of $300 per container from North Europe to Asia from 15 March, while one UK forwarder told The Loadstar this week that ONE had applied a $200 per 20ft surcharge on the same route.

The SCFI reading for the same week of last year showed $796 for North Europe and $810 for the Med; although current spot rates should also include an allowance for an IMO 2020 low-sulphur surcharge.

Elsewhere, the US components of the SCFI were both up on the week, with a 2% rise for the US west coast to $1,394 per 40ft and a slight tick up for east coast rates to $2,690 per 40ft. Twelve months ago, still buoyed by pre-tariff front-loading, the west coast rate was $1,549 and east $2,640, showing the more-robust transition-led east coast market.

CEO Patrik Berglund said: “Despite the virus shockwaves, the XSI (based on crowd-sourced rates from leading global shippers) has retained its upward trajectory through February, albeit only just.”

However, he added that spot rate decreases of 20%-25% since the beginning of the year could soon impact the long-term market.

“In that respect, we anticipate long-term rates will also begin to decrease in March. In fact, we already have some reports of slight decreases in the negotiated contracts coming into our platform from our leading global shippers,” he said.

According to Freightos.com marketplace data, China’s share of searches on its platform for freight bookings returned to 91% this week – the same as before the new year holiday – after dropping by around 15% at the start of the shutdown.

Nevertheless, talking to The Loadstar yesterday on the sidelines of its Supply Chain Summit & Compliance Conference in Houston, Texas, global logistics provider BDP International chief executive Richard Bolte said US importers and exporters were “very concerned” about the current situation.

“We are advising importers to look at other source options for their products, as they have already done to a certain extent on the tariff issues,” he said.

$2,000 in inventory stolen from local CVS