Photo:
Much of the processed recycling left in this warehouse will need to be sent to landfill. (ABC News: James Oaten)

Another Melbourne warehouse has been left with huge stockpiles of recycling, prompting calls for tougher regulation to better track the movement of waste.

About 150 tonnes of plastics were this week left at a warehouse in Tullamarine, in Melbourne’s north, after recycling company OzShred was told to vacate the property for failing to pay two months’ worth of rent.

It comes after five warehouses in Melbourne were left stranded with tens of thousands of tonnes of waste following the collapse of major recycler, SKM Recycling.

The landlord of the Tullamarine warehouse, Ange Marinakis, believes he was deceived.

Photo:
Ange Marinakis says he has been left with these bundles of rubbish to clear from his warehouse, after recycling company OzShred failed to pay its rent. (ABC News: James Oaten)

“The guy came across as a very friendly guy,” Mr Marinakis said.

“[He said] that they do a good thing for the industry, for the country, by recycling all this material.”

Mr Marinakis was told the company needed somewhere to temporarily store materials for research while a warehouse was set up in Sunshine North.

But after a few months, the rent started to arrive late, and then not at all.

Mr Marinakis said after a final warning that the gates would be locked on Monday, OzShred removed its machinery, but left behind huge bundles of rubbish.

The stockpiles appear professionally processed, but most of them are too contaminated and poor quality to be recycled and will be sent to landfill.

“I think people do recycling in good faith.”

“Whether it’s the mums and dads at their houses, or the councils, or the retailers, they were not expecting to be dealing with people … who are just going to dump the stuff and then run.”

Mr Marinakis estimates it will cost up to $30,000 to clean up his warehouse. 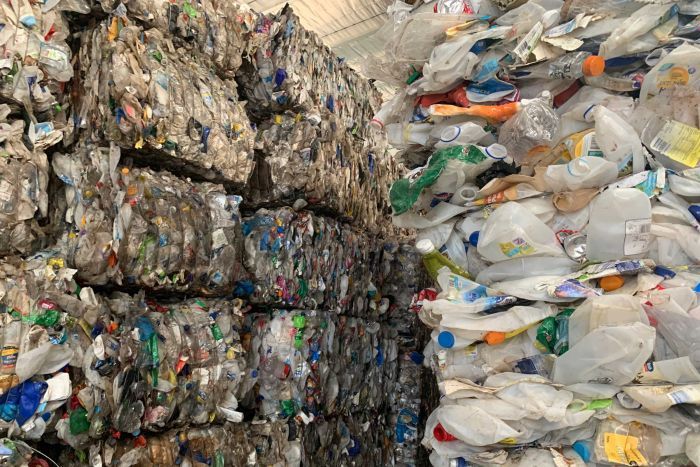 Photo:
Warehouse owner Ange Marinakis says people expect their recycling to be dealt with properly and not dumped or left behind. (ABC News: James Oaten)

Call for ‘paper trail’ to track where waste ends up

Deakin University waste management expert Trevor Thornton said the lack of regulation meant it would be almost impossible to track where the waste dumped in Tullamarine had originated.

“If you put your recyclables in the bin, a truck comes along to collect it. In a sense it’s good faith that it’s going to a recycling facility,” Dr Thornton said.

“You’ve got no idea if it’s going to end up in a warehouse in Melbourne and stockpiled.”

He said the recycling industry should adopt a similar system that’s used to manage the movement of hazardous waste, where permits and licences are used to create a paper trial. 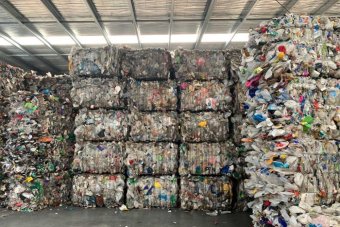 Photo:
Ange Marinakis estimates it will cost up to $30,000 to clean up this waste left in his warehouse. (ABC News: James Oaten)

“So the authorities can say, ‘you’ve generated this amount, it’s been collected, and it’s been taken to a site that’s licensed’,” Dr Thornton said.

“Or if it’s gone to a site that’s not licensed, then that would raise some flags and it could be investigated and solved.”

“We’ve got to have some system where there’s accountability.”

Mr Marinakis said in addition to better licensing and regulation, recyclers should be forced to take out insurance that could be used to pay for any potential clean-ups.

“It’s not so much the older operators, but a lot of the newer ones, you’ve got a lot of cowboys,” he said.

Percy Leon, who signed the warehouse lease for OzShred, would not answer the ABC’s questions about why he left the recycling behind, or failed to pay rent.

“That’s something between him and us, mate,” he said.

“You’ve only got 10 per cent of the story,” he added, before hanging up the phone.

Victoria was engulfed in a recycling crisis in July after major processor SKM Recycling refused to take on kerbside recycling from more than 30 councils.

Tens of thousands of tonnes of waste were dumped at five Melbourne warehouses after its administrators resumed kerbside recycling at its Laverton North facility. 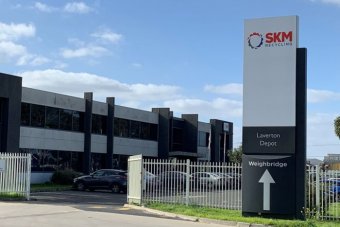 The landlord of one warehouse in Melbourne’s west, Carly Whitington, has been urging the Victorian Government to help process the waste, but to no avail.

In a statement, State Environment Minister Lily D’Ambrosio said the Government was working to grow the domestic recycling sector.

“The challenges in the recycling sector didn’t emerge overnight and won’t be fixed overnight,” she said.

“It will take time, planning and coordination across all levels of government.”

The Opposition said the latest stockpile showed the Government had no long-term solution for recycling.

“The Government needs to be sitting down with industry and identifying where are the gaps in the system,” frontbencher Nick Wakeling said.