Following on from the article from our ex-colleague and contributor Peter Smith yesterday, Day 2 is as impressive and big as Day 1. There really does seem to be something for everyone here. If you’re interested in Spend Intelligence, there’s a specific station and demo booth for it, same for supplier management, sourcing and so on. It’s a well laid out floor of partners (including Barclaycard, IBM, Deloitte, Celonis SE, as top-level sponsors, and many others through the tiers) and SAP Ariba stands, and unlike many events, so much (comfortable) seating, tables, food galore, fridges of drinks and an iced coffee bar to get you through the mammoth agenda. There are recycle bins everywhere; one can’t help but sense a genuine global responsibility message coming from our hosts.

Thankfully, the SAP Ariba event app lets you review the session descriptions and select those you want to add to your calendar to bring order to an event that could be quite overwhelming in content if you’ve not planned properly.

In terms of themes across the sessions and discussions I was part of, a constant thread has weaved through the days and that has been the power of data. Aggregating data from master data to supplier data and presenting back in one platform has a power much greater than the sum of the parts in terms of forecasting demand, risk management, delivery management.

In a Q&A style discussion between CMO Tifenn Dano Kwan, SVP Strategy & Customer Ops Arun Srinivasan and VP of Portfolio Marketing Drew Hofler, the sentiment was that the business world has a greater responsibility to make a positive global impact, be it in eradicating child labour, trading ethically and in an environmentally sympathetic way. Thus the insights from data flowing into the procurement team has the ability to drive significant change for good, way above cost savings and profits of the organisation. 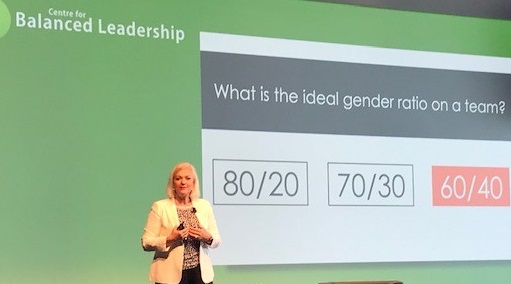 Another nod to the ‘greater good’ theme seemingly rippling through the event was the highly interesting Diversity and Leadership lunch, again hosted by Dano Kwan and dominated by the interesting 30 minutes led by Michèle Mees, entrepreneur and ambassador on diversity and leadership. Some interesting observations on how the most successful organisations have a 60-40 (in either direction) gender ratio of staff, more concerning the stat that as soon as a company has seated one female in an exec position, the likelihood of a second seat being filled by a female drops by 50%, making it feel like a box-ticking exercise. The audience agreed with Michèle that gender should not matter, it’s the qualities they bring which enhances work happiness and success. By far a moment which passed through the conference for the rest of the day was a question from an attendee identifying himself as from the Middle East, asking Michèle: “The women who work in my region all seem to cry and get emotional, is that normal or just in my region?” After the intake of air from most of the audience and then a brief pin-drop silence, Michèle had us in the palm of her hand. “Thank you for the question” her genuine and eloquent start. She went on to mention how reactions of any type, anger, bossiness, emotion, are responses and emotion should never be seen as a weakness, but a strength. We broke out in applause at the dignified, gently delivered response and a collective sigh of relief was palpable.

I enjoyed an insightful discussion with Tobias Dosch, Head of Solutions Management at SAP Ariba. First off, I asked about the trend he’s seeing with how customers are buying tech. Without hesitating Dosch responded that customers want to buy ‘one’ platform, to avoid leakage and to compare data not just in procurement but across the organisation (again, the impact of data theme). No surprise then that the team are working hard on merging data through Ariba, Fieldglass, Concur, and SAP S/4. Their strategy is to create an intelligent suite of key building blocks which could be sold individually but work seamlessly end-to-end. States Dosch with meaning: “We really haven’t seen the benefit of the four companies coming together and when we do, it’s going to be really exciting.”

As with other providers I’ve asked, Dosch confirmed that risk management is a topic that is exploding in significance with their customers. Where I have also seen much discussion on contracts, Dosch clarified that their customers are looking for one central truth through a unified approach in sales and procurement contracts. I appreciated the honesty; this isn’t a feature of the offering today, but that it’s being talked about and acknowledged as a customer desire came across positively.

A similar refreshing approach was in discussions on Ariba’s Supplier Network. It’s long been a bitter pill for some suppliers to pay to be part of the Ariba Supplier Network in order to do business with a customer. Dosch agreed and went on to say that the supplier-side benefits are weaker than they could be, and Ariba need to create a value proposition for suppliers. There are plans to enhance the experience for suppliers, including possibilities for them to increase revenue opportunities through the portal. Watch out for a press release later this year on Supplier Portal enhancements.

So, another very positive day at SAP Ariba Live. Last day tomorrow with report to follow.