MONTREAL — Frequent injuries, lack of adequate training and equipment, wages hovering around the minimum hourly rate: a survey of warehouse workers recruited by employment agencies in Montreal paints a portrait of a sector “based on the over-exploitation of a labour force composed largely of migrants.”

The report released Saturday by the Immigrant Workers Centre (IWC) and the Association des travailleurs et travailleuses d’agences de placement (ATTAP) presented disturbing findings in the universe of warehouses and distribution centres, where an exponential amount of online commerce is conducted.

As ‘Black Friday’ and the holiday shopping frenzy approach, these two organizations point out that the increasing demands on the availability and speed of deliveries of products are being felt by a handful of people, largely from Haiti, Africa and Latin America, who offer cheap work.

The research project carried out in collaboration with community workers notes that they are particularly vulnerable to alleged rights violations, as employment agencies and client-companies allegedly dismiss each other’s responsibilities and draw benefit from the insecurity of newcomers who prefer to keep a low profile.

Of the 40 or so workers interviewed for the research project, almost half claim they did not receive health and safety training at their workplace, or even appropriate protective equipment. One in four participants said they have already been injured on the job.

Mohamed Barry is part of the lot. From Guinea, he still works with a cane, six years after a work accident involving a forklift. He says he still has not been properly cared for.

“They do not care about worker safety. All that interests them is to make money,” he said.

Another former warehouse worker, Olawale Ogundipe, pointed out that newcomers are not “guided” by their rights and remedies. This Nigerian immigrant also said he was left alone after an ankle injury, while he was desperate to work and feed (his) family.

He denounced a lack of clarity surrounding the protections for the workers of employment agencies, which makes them, in his view, highly likely to slip through the cracks.

“The agency hires us and sends us to work for a company. We are not staff, agency or company, so what are we?” he said.

About half of the participants in the research project alleged the absence of paid sick leave and the failure to meet the minimum pay of three hours when reporting to work.

Two-thirds of respondents said they earned less than $15 an hour, some even being paid under the minimum wage.

A company often cited as an example by IWC and ATTAP is Dollarama. In a statement sent by e-mail, the Quebec retailer says it offers “competitive compensation and has an excellent safety record” in its distribution centre and its six warehouses in Greater Montreal.

“Dollarama maintains strict health and safety standards within its distribution centre and warehousing facilities, applicable to all, and has an excellent safety record,” read an emailed statement from Lyla Radmanovich, media relations representative from Dollarama.

“We are proud of our diverse workforce across our operations, which is representative of the diversity of the communities we serve. We provide competitive compensation, as well as a dynamic, discrimination-free work environment,” wrote Radmanovich. 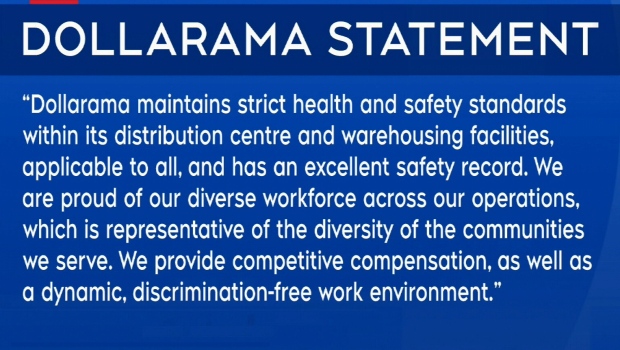 A solution by decree

With the arrival of a first shipping centre from Amazon to Montreal next year, the IWC and ATTAP are asking the provincial government to adopt a sectoral collective agreement decree to guarantee the same basic working conditions for all warehouse workers recruited by employment agencies in Quebec, whether unionized or not.

Community organizer Mostafa Henaway says the workers could hardly handle the fight themselves, given the complexity of organizing in such volatile circumstances. Especially since it is the disparate workforce agencies that are generally considered the employer, not the client companies.

Added to this is the apprehension of some immigrant workers, who fear jeopardizing the life they are building on Canadian soil. Not to mention that placement agencies are often their last resort after facing discrimination during their own employment process.

Henaway, who acted as lead investigator for the investigation unveiled Saturday, with the support of the Confédération des syndicats nationaux (CSN), pointed out that decrees have already “levelled the playing field” for security guards and maintenance staff in some areas, for example.

“Amazon should not be able to land in the city further aggravate levelling conditions down,” he said.

This report by The Canadian Press was first published Nov. 23, 2019.