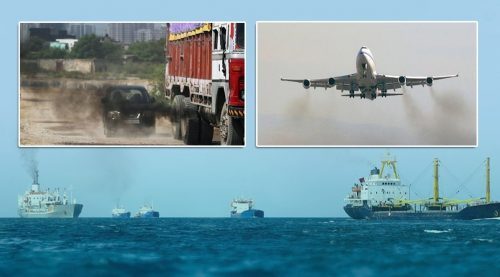 ONE IN THREE MAJOR TRANSPORT FIRMS NOW ALIGN WITH PARIS PLEDGES, BUT
SECTOR MUST REV UP CLIMATE AMBITION TO MATCH 2020 FAST TRACK

35% of transport companies have emission reduction plans consistent with
the national pledges made in Paris in 2015; but with COP talks set to ratchet
up climate targets in 2020 less than one in five (19%) on track to limit
climate change to 2°C.

Autos: Car manufacturers are getting steadily cleaner. 43%of auto companies
have improved their climate Management Quality this year, and average fleet
emissions intensity is falling up to 2.5% per year.

Shipping: The largest publicly-owned shipping companies are
surprisingly green in terms of emissions intensity. 61%are already aligned to a
2°C or below pathway. But these companies are likely unrepresentative of the
sector as a whole.

Aviation: Sector’s climate governance is improving, but airlines’
Carbon Performance is worse than any other sector analysed by TPI except oil
and gas. Investors critical of potential dependence on offsetting to achieve
carbon reductions

Direct emissions from transport currently account for nearly one quarter
of total energy-related CO2emissions worldwide, but new investor research on 57
of the world’s largest transport companies finds that less than one fifth (19%)
have emissions reduction plans in line with a path to keep global warming to
2°C or below.

The study was carried out for the Transition Pathway Initiative (TPI) by
the Grantham Research Institute on Climate Change and the Environment at the
London School of Economics. It analyses the climate Management Quality and
Carbon Performance of 57 of the world’s largest and highest-emitting public
companies involved in automobile manufacturing, air transportation and
international freight shipping.

“From freight ships to Ferraris, it’s encouraging that most major
transport companies have set a course for a low carbon future. But they are not
going fast enough. The message for the world’s airline, automotive and shipping
giants from both the UN climate talks and today’s TPI research is very clear:
As the low carbon transition ratchets up in 2020 the transport sector risks
being left behind. Among 22 large car makers, only two are on track to keep global
warming to 2°C or below, so the rest must accelerate their climate action to
meet the demands of climate-conscious investors.”

Adam Matthews, Co-Chair of TPIand Director of Ethics & Engagement at
Church of England Pensions Board added:

“Investors will be troubled by stalled climate progress in aviation, and
by the sector’s reliance on net emissions targets. The issue with these targets
is that they obscure whether emission reductions plans will depend largely on
offsetting rather than a shift to lower-carbon aviation operations. A
dependence on offsetting is not a credible climate strategy given the urgency
of making deep cuts in greenhouse gas emissions across all sectors of the
economy.”

Key findings from the report include:

Shipping accounts for around 3%of anthropogenic greenhouse gas emissions
and the sector has been labelled agraph worst offender environmentally, due to
its use of heavy ‘bunker fuel’.

However the TPI research calculates emissions intensity,i.e. emissions
relative to cargo mass and distance transported – and finds that eight out of
13 shipping companies (61%)are alreadyaligned with the more ambitious 2°C or
below benchmarks for 2030.

As shown in the image to the right this is a much higher level of
alignment than the airline or automotive sectors and makes shipping the best
ranking of all sectors analysed by TPI in terms of emissions intensity. Though
it is important to note that the research analyses the 13 largest
publicly-owned companies engaged in international marine freight transportation
– which tend to operate newer, larger vessels, which have lower carbon
intensities are therefore are unlikely to be representative of the sector as a
whole*.

Car makers are showing steady climate progress. Nine of the 21
automotive companies (43%) for which TPI has trend data improved their climate
Management Quality score this year. The sector performs very well on
incorporating climate change into executive remuneration (59%), and on
disclosing emissions from use of their products they sell (77%).

On Carbon Performance, nine auto manufacturers (41%) are now projected
to align with the Paris Pledges in 2030. This is a 12% improvement on last
year’s assessment. Indeed, the average fleet emissions intensity is currently
falling at a rate of 2-2.5% per year based on 2016-2018 data.

Only two car companies (Daimler & Tesla) are projected to align with
a path to keep global warming to 2°C or below.

The average climate Management Quality score of airlines has improved by
over 8% since Spring 2019; but the airline sector’s Carbon Performance remains
the second worst in the TPI database, ahead of only oil & gas in terms of
alignment with Paris benchmarks by 2030.

Almost 60%of the 22 airlines assessed have emissions-reduction targets
that align with the Paris Pledges in 2020. However, beyond 2020 most airline
targets are based on net emissions, including offsetting. TPI discounts these
net emissions targets due to the uncertainty in quantifying them. (A recent
European Commission study of carbon offsets found that 85% of the offset
projects under the UN’s Clean Development Mechanism (CDM) failed in the
objective of reducing emissions).

As these net targets are discounted, only two airlines (Easyjet and Wizz
Air) are aligned with any of the benchmarks by 2030. Only Wizz Air is aligned
with a benchmark to keep warming to 2°C or below.

Professor Simon Dietz, Co-Director of the
Grantham Research Institute on Climate Change and the Environment, and lead
author of the report said:

“Airlines’ offsetting plans are too opaque at present. The IEA has made
it clear that airlines’ own operational emissions must fall in order to achieve
climate targets, so reduction strategies that rely too heavily on offsetting
are not credible. Airlines that set net emission reduction targets need to
provide more information on how much their gross emissions will fall and how
much will depend on offsets.”

“Transport is a critical sector to decarbonize. TPI’s assessment finds
that corporate boards in the transport sector are showing an increased level of
awareness. But it is also clear that more decisive action is needed to align
their long-term strategy to a low-carbon future. This is particularly the case
for road transportation, where technical solutions are available, but only two
out of 22 car manufacturers have aligned their strategies with a 2 degrees or
below scenario. This exposes investors to significant financial risk, since
regulators are increasingly adopting policies supporting the shift towards
cleaner transportation. This research identifies areas where constructive
investor engagement can strengthen companies’ commitments”.