The Oregon Department of Energy has issued a notice of violation to a hazardous waste facility for accepting more than 2 million pounds of radioactive materials east of the Columbia River Gorge.

Chemical Waste Management, a subsidiary of Waste Management Inc., was illegally dumping radioactive materials it received from a North Dakota company, Goodnight Midstream, at its waste landfill near Arlington, Oregon.

Chemical Waste Management is the only hazardous waste landfill in Oregon and according to the ODOE, Oregon law prohibits the disposal of radioactive materials in the state.

“We received an inquiry from a citizen from North Dakota in September who was under the impression fracking waste from North Dakota was being disposed of in an Oregon landfill,” ODOE’s assistant director for nuclear safety Ken Niles said.

The agency found that Chemical Waste Management dumped nearly 1,284 tons of radioactive waste it received from Goodnight Midstream over a period of three years, totaling over 2.5 million pounds. 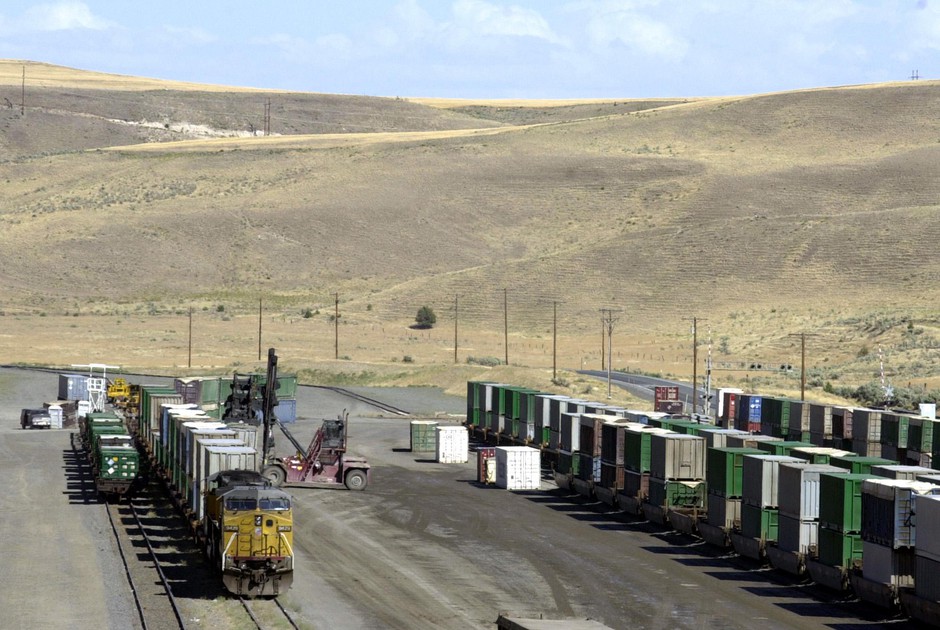 Garbage, hauled in by train from long distances, is unloaded onto trucks for transfer to the landfill in the barren, rolling hills near Arlington, Ore., Aug. 3, 2004.

“Then they filtered that water so that they can reuse it, that radium was captured in what are known as filter socks, which are very long teabags if you will, and it accumulated there and what we’ve gathered is about 80% of the total waste consisted of these filter socks,” Burright said.

Oregon has a threshold of five picocuries per gram of radium 226. Picocuries are a measurement of the radioactivity in a liter of air.

“The waste that was received at Chemical Waste Management Arlington had a range of concentrations over the time running from just a few picocuries per gram up to the maximum in about one and half tons total was around 1,700 picocuries per gram,” Burright said.

Initially, Chemical Waste Management had no records of a relationship with Goodnight Midstream. But it was later confirmed that the North Dakota company contracted a third party, Oilfield Waste Logistics, to dispose of its solid waste. Shipping manifests showed that OWL was sending Goodnight Midstream’s waste to Arlington.

“OWL basically misrepresented the fact that this waste could come into Oregon. … In the manifest that they provided to Chemical Waste Management Arlington, it basically said that this waste does fit within Oregon’s regulations,” Niles said. “The other part of the problem is that Chemical Waste Management did not do their due diligence to ensure what they were being told by OWL was in fact accurate.”

ODOE’s notice of violation has directed Chemical Waste Management to prepare a risk assessment to develop a corrective action plan to prevent recurrence. This will also help determine the best and safest course of action for the waste that is already buried in the landfill near the Columbia River.

ODOE hasn’t issued any fines associated with the illegal dumping of radioactive waste. Officials said it doesn’t meet the criteria that would qualify for a fine. ODOE expects the risk assessment action plan to be submitted by the end of April.

“This is the first time that we’ve had an incident like this that we have become aware that radioactive material has been brought into the state and illegally disposed in violation of our rules,” Niles said.

Dan Serres from the Columbia Riverkeeper said the news of the illegal dumping of fracking waste is a serious violation of the public trust and it’s a huge risk for Oregonians.

“It’s seems unacceptable that Oregon can be used as a radioactive fracking waste dump for three years,” Serres said.

“Oregon is trying to move in the direction of clean energy and what this tells us is, it is urgently important to stop using fracked gas and fracked oil as quickly as possible, because of these health risks that come with fracking to workers and communities where this toxic material is being dumped,” Serres said.

Waste Management Inc. did not respond to a request for comment.