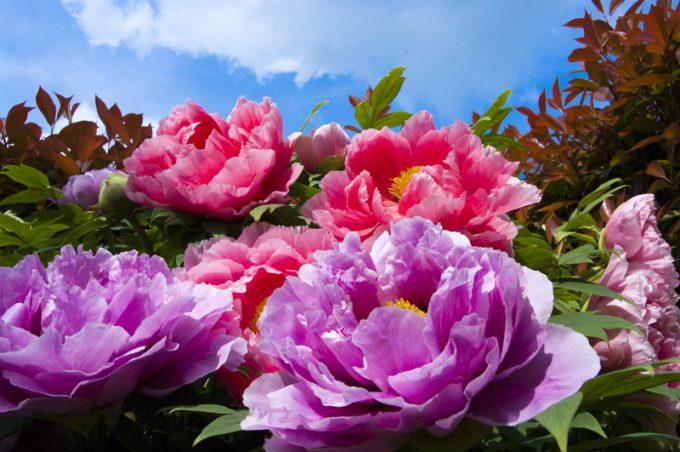 People in this industry tend to associate Ted Stevens Anchorage International Airport with freighters and kerosene, rather than with flowers.

But the airport authority is planning to change this perception, getting ready to plant peonies for export.

As these flowers are popular for weddings, there is solid international demand, noted airport director Jim Szczesniak.

Peonies grown in Alaska bloom later than those from further south, so Alaskan growers have a window in which they face virtually no competition, he pointed out.

So the airport authority concluded it may as well get active on the growing side and has planted some tests beds on a patch of land on the perimeter.

According to Mr Szczesniak, the results were good, so some land has now been designated for growing peonies.

And, as well as flowers, the airport is looking to build up king crab shipments.

It is in the process of setting up crab refreshing tanks, which will allow the carriage of live king crabs to Asia. The crustaceans will spend two days in the tanks before continuing their journey to market. The tanks can hold two to three tons of king crab.

If the venture is successful, more capacity will be added, Mr Szesniak said.

“We’re trying to make Anchorage ‘sticky’ for customers – not just gas and go,” he said.

Alaska itself is a steady exporter of fish and seafood, but these volumes are dwarfed by the perishables that pass through Anchorage on freighters bound for Asia.

Like most other commodities coming through, those loads rarely touch the ground, as the airport is a refuelling stop rather than a transit station (except for the integrators). Transit activity is relatively small and mainly tail-to-tail.

Mr Szczesniak sees plenty of opportunities for transfers, stressing liberal transit rights. However, lack of infrastructure has been a problem. Carriers thinking of transfers have been discouraged by the fact that it is a three-mile round-trip on a tug between the tarmac and the warehouse, a prospect that puts off carriers with perishables as well as with electronics like iPads.

A new facility with temperature-controlled space is planned to address this issue, expected to be up and running in three years.

The new building is one of four cargo facilities planned to add 1.4 million square feet of warehouse space to the airport’s capacity. A separate project will expand FedEx’s footprint at Anchorage.

The remaining two projects will start development on the other side of the runway. Tenants for these have not been named yet and it is unclear when development will get under way.

The airport also intends to expand its apron space, adding three parking stands for 747-8 size freighter aircraft. Like the first two buildings, these should be ready in three years, Ms Szczesniak said.

He sees a role for Anchorage as a storage and distribution point for large, time-sensitive items like aircraft engines, pointing out that land and warehousing costs at the Alaskan airport are significantly lower than at big hubs in Asia or Europe.

“We have a small operation doing that for MRI machines,” he said.

E-commerce promises further opportunities, given the airport’s network and depth in widebody freighter operations, which include non-stop services to 22 destinations on a daily basis.

A European freighter connection has been the missing piece in this puzzle. This has remained elusive, but next year two European passenger carriers – Eurowings and Condor – will be routing flights through Anchorage. Mr Szczesniak is determined to seize this opportunity to demonstrate that the airport can fill passenger aircraft bellies and is able to graduate to freighters.

The airport will also be looking to put its newly grown peonies on flights to international markets.