Singapore —
Attractive steel margins and a relative lack of pollution controls are having a marked impact on the iron ore procurement preferences of China’s steel mills in December ahead of the Lunar New Year holiday that falls early in 2020, on January 25.

Attractive steel margins have shifted the priority for Chinese mills towards efficiency and the utilization of higher quality iron ore fines, widening the discount for low grade and non-mainstream fines against the Platts 62% IODEX in December and weakening demand for low alumina Brazilian fines. 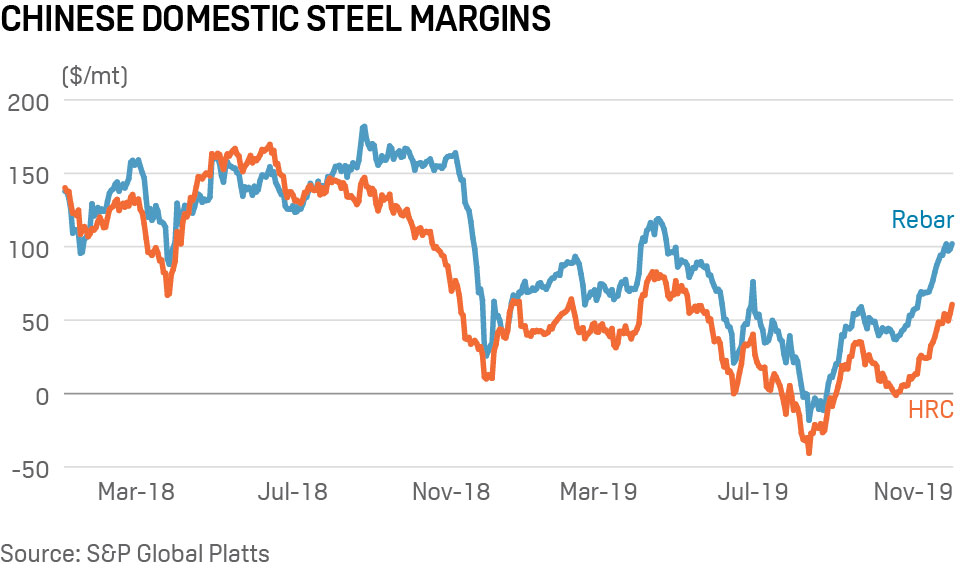 When China’s domestic hot rolled coil margins were in the $40-$70/mt range and rebar margins at $70-$90/dry mt in May, premiums for Vale’s Brazilian Blend Fines or BRBF over the front month IODEX rose to around $7-$8/dmt while Pilbara Blend fines remained around $2-$3/dmt. Similarly when steel margins were high over August-October 2018, BRBF premiums were notably higher than for PBF.

However, amid the rebound in steel margins since November to above $60/mt for HRC and above $100/dmt for rebar, premiums for both have remained mostly below $2/dmt, reflecting the lack of interest in securing imports of low alumina fines. 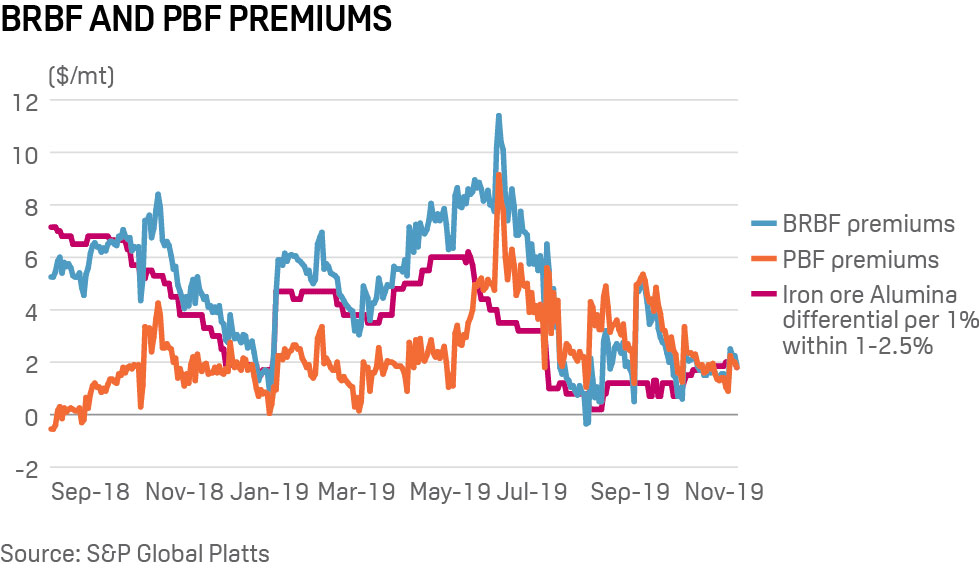 Among the factors impacting demand preferences has been looser environmental restrictions on Chinese domestic concentrate production this year. Chinese iron ore tends to be low grade material that has to be refined in a polluting process to become high grade concentrate.

In Hebei, domestic iron ore concentrate tends to have a Fe content of around 65%-67% Fe and low alumina levels of less than 1%, making it a viable and cheaper low alumina alternative to imported Brazilian fines for mills in Tangshan, especially after the Vale dam disaster in January tightened Brazilian supply of low alumina iron ore.

Another major factor has been weaker steel production outside of China, in Europe, the Middle East, Japan, South Korea and Taiwan, leading to spot sales of both pellets and high grade pellet feed into China, and placing further downward pressure on pellet premiums that were already lower than in 2018.

China’s iron ore imports from Ukraine surged 67% month on month to 1.67 million mt in August, and more than doubled year on year, and from Russian surged 120% on month to 0.7 million mt and were up 75% on year — before increasing further to almost 1.28 million mt in September and 1.35 million mt in October, China customs data showed.

Typically, high grade iron ore brands with low alumina from these countries as well as Scandinavia, Canada and the Middle East tend to be utilized more by non-Chinese producers due to proximity and their generally higher demand for high grade iron ore with low impurities.

The increasing preference of Chinese mills for drawn-out restocking from ports rather than a last-minute buying rush for seaborne cargoes before the Lunar New Year holiday was expected to have a longer-term impact on market dynamics.

Large-scale procurement activity in a short period is now avoided due to the price surge it prompts, which leaves mills with little negotiating power. In addition, stricter limits on overloading trucks at ports after a bridge collapse in Jiangsu in October have slowed down purchasing for many mills.

The sharp increase in price volatility in 2019 has kept many Chinese mills away from the seaborne market due to the risk of committing to large Capesize volumes. Even on a floating basis, sharper inter-month pricing changes than in 2018 have led to a preference for procuring smaller volumes at ports, even at comparatively higher prices, to reduce pricing risk.

Ahead of the Golden Week holiday in October, strong demand emerged from both steel mills and traders for Australian cargoes on expectations of supported levels of steel production.

However, more stringent than expected pollution controls in October, leading to sintering and production cuts, led to a 1.2 million mt fall in steel output from September to 81.52 million mt.

The spread between the US dollar equivalent of Platts IOPEX — the 62% index at northern Chinese ports — against Platts IODEX was $8-$11/dmt in late September as Chinese mills opted for procuring at ports at higher prices due to the flexibility of securing lower volumes. 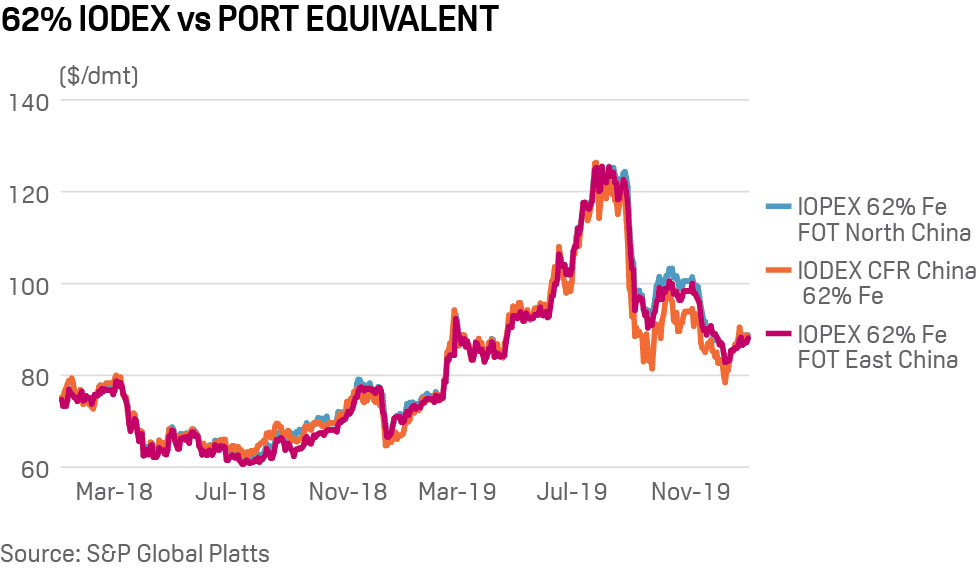 Unlike pollution controls, narrower margins are not expected to impact blast furnace utilization rates, which will only fall if margins turn negative. So, with sintering and blast furnace restrictions currently weak, demand for direct feed raw materials is based almost entirely on attractive steel margins.

Given it is winter, some market sources doubt there will be wider use of high grade-low grade mixtures as a more economical replacement for Australian fines, noting the general preference for fines with low moisture levels to facilitate storage and the relative lack of stability in specifications for certain products, which limits demand to ports where specifications are confirmed before purchase.

Although in theory higher grade low alumina Brazilian fines would enable mills to increase production efficiency, volatility in steel margins presents a hurdle for large mills that are unable to adjust their sinter feed quickly in the event margins narrow.

Mills in northern China that want to increase Brazilian fines usage have the option of port-blended BRBF or the seaborne option from Teluk Rubiah. The tightness in iron ore supply this year from Vale continues to limit end-user interest in a large-scale increase in Brazilian fines usage, especially given the availability of competitively priced low alumina hematite concentrate. 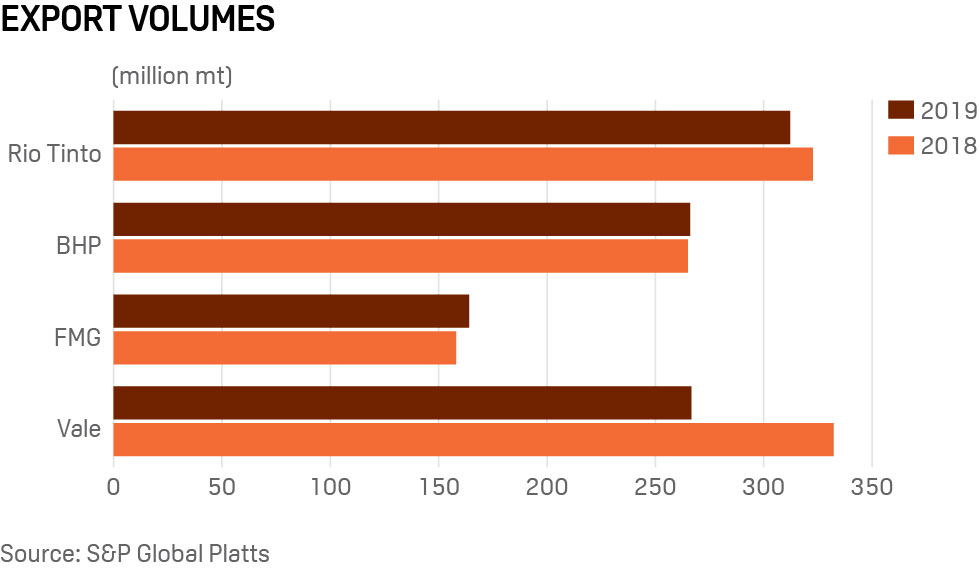