The state Coastal Resources Commission, when it meets Nov. 19-20 in Emerald Isle, is expected to consider for adoption new management strategies including increased use of sandbags and other shoreline hardening, for addressing the “unique circumstances” experienced at the two North Carolina inlets with federally maintained shipping channels. 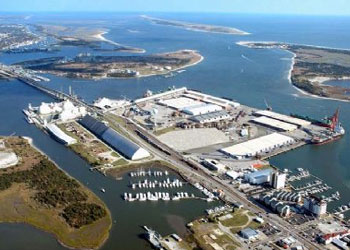 The meeting is set to begin at 2 p.m. Nov. 19 and at 9 a.m. Nov. 20 at the Islander Hotel, 102 Islander Drive. A full agenda for the meeting is available on the Department of Environmental Quality website. A public comment period is scheduled for 11:30 a.m. Nov. 20. The Coastal Resources Advisory Council will meet at 1 p.m. Nov. 19.

According to the agenda, the CRC will address the management goals and use standards for areas of environmental concern, or AECs, adjacent to Beaufort Inlet and the Cape Fear River Inlet.

AECs are areas of natural importance that could be destroyed easily by erosion or flooding or it may have environmental, social, economic or aesthetic values that make it valuable to the state, according to the state Department of Environmental Quality’s Division of Coastal Management, which serves as staff to the CRC.

The General Assembly in 2012 directed the CRC to study the feasibility of creating a new AEC for lands neighboring the Cape Fear River, which led to a comprehensive study of all inlets. The study resulted in the CRC developing management objectives and use standards for a new AEC adjacent to the Beaufort and Cape Fear River inlets, which have highly managed and engineered shorelines subject to Dredged Material Management Plans, according to a document from DCM.

Staff then met with local governments representatives about the current rules and new management strategies the representatives felt were needed including wanting more flexible sandbag rules, the need for more flexibility at Fort Caswell to address erosion and other issues and the beneficial use of beach-compatible dredged material and the limitations of the current federal Dredged Material Management Plan at Beaufort Inlet.

An early draft of the AEC rule included a beneficial use requirement for beach-compatible dredged materials but was removed because of concerns from the Army Corps of Engineers, NCDEQ and the state Department of Transportation.

Use standards developed for the AEC include allowing the use of large sediment-filled geotextile tubes, or geotubes, and of sandbags as temporary erosion control structures to protect frontal or primary dunes and infrastructure. The definition of “imminently threatened” was also broadened. All other rules applicable to ocean hazard areas would still apply.

The proposed AEC boundaries were determined using the updated inlet hazard area boundaries developed by the Commission’s Science Panel in 2010 but were expanded at the request of Brunswick County’s local governments to include additional area within their jurisdictions.

In June, the fiscal analysis was approved by the state’s Office of State Budget and Management. A public comment period was July 1 to Sept. 18 and public hearings were held in Carteret, Brunswick and New Hanover counties during that time.

While no comments were made during the public hearings, the Southern Environmental Law Center on behalf of the North Carolina Coastal Federation and their members submitted a written comment expressing concerns that allowing frontal and primary dunes and infrastructure to be considered imminently threatened could increase the use of sandbag structures that may lead to increased environmental impacts, the use of geotubes could increase beach erosion and that the AEC boundaries were drawn arbitrarily and without regard to a science-based approach.

The comments also asked the CRC to consider that a proposal to deepen and widen the Wilmington Port could increase erosion of the adjacent beaches and increase the demand for erosion control structures.

It costs about $500 to produce this and all other stories on CRO. You can help pay some of the cost by sponsoring a day on CRO for as little as $100 or by donating any amount you’re comfortable with. All sponsorships and donations are tax-deductible.