Radiological testing conducted at the site of a Nov. 26 sediment collapse into the Detroit River showed levels of radiation within acceptable ranges, state officials said Friday evening. They were were still awaiting results to see whether the spill at the site of the old Revere Copper and Brass plant, tainted with uranium following manufacturing activity as part of the World War II-era Manhattan Project, had drudged up harmful toxins stored in the river’s sediment.


Radiation tests were conducted at more than 1,000 data points throughout the site of the old plant.


Levels ranged between 3 and 5 microroentgen per hour (Ur/hr), officials said. Naturally-occurring radiation levels in Michigan are typically between 5 and 8 (Ur/hr), they said.


The water samples will be tested for material including suspended solids, metals (including uranium), PCBs, and industrial contaminants, officials said. They were taken from in front of the site of the collapse, as well as points upstream and downstream.


Michigan environmental officials were to on Friday begin testing the Detroit River for contaminants near a partially collapsed storage site once polluted with uranium and other materials, as environmentalists blasted the state for what they saw as an insufficient response.


Officials with the Michigan Department of Environment, Great Lakes and Energy confirmed Thursday that a portion of the site owned by Detroit Bulk Storage collapsed Nov. 26 under the weight of aggregate sand and stone materials. The site, near Historic Fort Wayne, previously housed the Revere Copper and Brass plant, where tons of uranium were rolled and extruded to help develop the nuclear bomb during World War II.


The collapse had metro Detroiters on edge Thursday, as it occurred just upstream from Great Lakes Water Authority intake valves that feed the downriver area. Though previous federal testing has indicated the site does not contain harmful levels of radioactivity, environmental watchdogs warned a disturbance of river sediment could release toxic chemicals like mercury, PCBs and PAHs into the water. 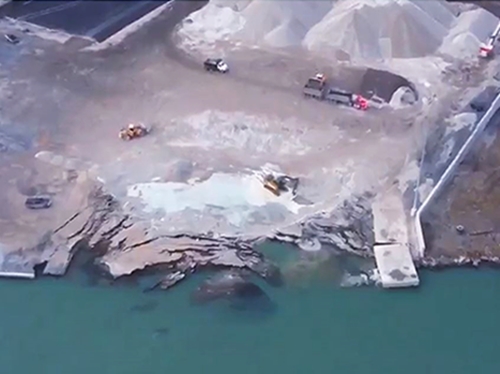 
Friday morning, GLWA released a statement saying it was conducting expedited testing for radio-nuclides within its water system.


The intake valves are located on the Canadian side of the river, out of the way of the direct flow route, according to a water quality customer service rep at the autority. However, she said a water storage facility serving Lincoln Park, Allen Park, Brownstown and other downriver communities is located on the U.S. side, within the flow route.


EGLE conducted a preliminary investigation into the collapse Thursday. The agency downplayed any potential public threat and said it did not feel the need to issue a precautionary bottled water advisory.


“We need to see what’s there and we need to be responsible in our investigation and do our due diligence in terms of investigating exactly what the situation is,” spokesman Nick Assendelft said. “Until we have some of those answers it certainly would not behoove us to jump to any sorts of conclusions.”


He and the spokeswoman with GLWA were unable to immediately answer specific questions that could shed light on the potential threat to consumers. They could not say whether water collected after last Tuesday’s collapse would have already reached residents, or where exactly water from the downriver intake source ends up.


GLWA provides water to more than 80 communities in southeastern Michigan. The intake in question is not Detroit’s water source, the city’s water and sewerage department said; that intake is near Belle Isle, upstream from the bulk storage facility.


Details on the water authority’s treatment and screening processes were also not immediately made available Thursday, but the water quality rep said Friday that the system’s screening is limited to E. coli and other coliforms.


Some residents and community activists expressed frustration over the response, calling it slow and inadequate.


The incident was first reported by The Windsor Star Thursday. EGLE confirmed it learned of the collapse the day before — nearly 10 days after it occurred.


“How in the world is it possible that we are hearing from Canadian news networks, days late at that, before we are hearing from our own authorities in charge of protecting us?” said Justin Onwenu of the Sierra Club. “Michiganders deserve emergency response systems in place that will assure communities that public health and safety is adequately protected.”


Some of the alarm over radioactive materials may have stemmed from an apparently inaccurate citation of a 2013 Wall Street Journal report on the old Revere site. The Star and Free Press quoted the Journal as saying a 2011 evaluation by the U.S. National Institute for Occupational Safety and Health concluded the “potential exists for significant residual radiation” at the site. However, the Journal’s full description of the report’s findings said the “facility poses a potential for significant residual contamination outside the period in which weapons-related production occurred up to the time that the facility was demolished.” Revere was torn down in 1989.


EGLE told Deadline Detroit that the Environmental Protection Agency remediated at least part of the land in the ‘90s, taking readings that showed “below background levels” of radiation. A separate 1990 evaluation by the Department of Energy found radiation levels were below the cleanup criteria for that time.


Assendelft was unable to immediately provide further detail on those tests, and could not speak to whether a disturbance to the soil could result in higher-than-expected levels of radioactivity.


Earlier this year, EGLE’s Materials Management Division analyzed samples of river water near the site and found “no evidence of uranium or thorium above natural background levels.”