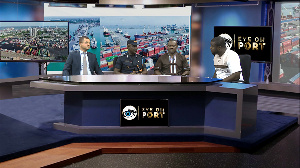 The National President for Borderless Alliance, Ziad Hamoui, has described Ghana’s strides to improve its port infrastructure, in order to position the country as a hub for inter-regional trade as a positive trajectory.

He has however advised that digitization would have to be increased, and human interference lessened to the barest minimum, to enhance delivery of service to woo more transit business to Ghana’s corridor.

“We have been modernizing our major infrastructure in order to allow us accommodate a role as a conduit to West Africa but at the moment, we have to look at how to reduce the human factor to the minimum. That is the main point why the decision has been taken to go digital,” he said.

Speaking on the same program, the Chief Revenue Officer in Charge of Transit Terminals and Preventive, Douglas Konadu Yiadom, revealed that Government has given the green light for the Customs Division of GRA to reintroduce intervening checkpoints to help trace the problem of diversion which has been a major concern associated with the transit business, and this initiative was supported by the Head of ISRT Unit of SIC.

“We want announce that the Government has given us the greenlight to activate some of the barriers that were removed,” the Customs officer revealed.

“These are not barriers. These are customs mandatory checkpoints that would have to do the update once a vehicle gets there for the collection of statistics. It will help us know where the goods got before they were diverted. So I support this customs decision to bring back the mandatory checkpoints,” the Head of ISRT Unit of SIC elaborated.

But Ziad Hamoui cautioned that this is not the friendliest means of trade facilitation, especially comparing it to other neighboring countries. Instead, he called for the improvement of risk management at source to eliminate the likelihood of cargo diversion.

“The Minister of National Security at a time in Togo took a decision to abolish the checkpoints. Since then the checkpoints are not there and their trade is flowing. Ghana is one of the more difficult countries to tackle because of the structure of the security agencies,” he expressed.

Douglas Konadu Yiadom admitted that the tracking devices placed on transit vehicles are unreliable adding to the problem of cargo diversion.

He added that, GC-Net, the company contracted to provide the devices has promised to improve the devices.

“We have engaged them and they have promised changing the stock.”

The Head of Inter-State Road Transport Unit of SIC Insurance Company, Anthony Osei Ntiamoah, also asserted that his outfit is the national guarantor responsible for placing insurance on transit cargoes to secure revenues for government in case of diversion.

He proposed the concept of a unified database for transit vehicles that would check the problem of unregistered vehicles having the opportunity to circumvent the system and indulge in the diversion of cargo.

“We could have vehicles with fake registration numbers entering customs declaration. I met Mr. Yiadom and said there is the need for reregistration. And we should not allow individuals to come to customs to register a truck,” he proposed.

He also expressed the push for a sanitation of the freight forwarding industry, who according to him have some dishonest members who look to circumvent the system to indulge in the diversion of transit cargo.

“Now we can have a criterion to reduce the number. Let’s say, any freight forwarder who would want to do transit would have to have zero outstanding in his name, a clean slate. We would add you to declare transit. But when there is a diversion, aside GRA coming after you, we would also take you off,” he added.

Ziad Hamoui, was of the opinion that this should be extended to haulage companies and various service providers in the transit chain to have a holistic improvement of the bottlenecks.

“There are many countries who do not only have limitations with freight forwarders, but tracking companies and the requirements of these tracking devices. In Morocco for example, you have very strict rules that will allow you to apply as a hauler in the country,” he said.

The Chief Revenue Officer in charge of Transit revealed that there has been an upsurge in transit volumes over the year, but some of the major concerns that threatened the transit business included some transitional issues of the commencement of the MPS Terminal 3 and the 1st Port rule which was to be introduced.

“During the initial stages of the Terminal 3 operations, we have some hitches but they have been resolved,” he said.

The experts also admitted that the uncertainties around the proposed introduction of the 1st Port Rule Policy discouraged some Transit Economic operators from using the Ghanaian corridors.

“The initiative in itself was a good one. But the inadequate prior consultation created uncertainty within the transit business community,” they revealed.

On the 10 days’ period of allowance for transit vehicles to stay in the country after the discharge at the port, the Customs official said the Division is flexible to deal with delays that may come from unforeseen incidents and accidents.

The pundits were unanimous in their optimism for economic opportunities within the transit trade in spite of the fact taxes and duties are not directly charged on transit goods.