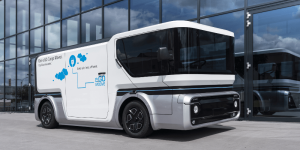 The joint venture e.GO Moove presents the cargo version of the e.GO Mover, which was specially designed for delivery services and craftsmen. In addition to the electric drive, the e.GO Mover will also optionally feature a compact fuel cell range extender.

Next year, the joint venture of ZF and e.GO Mobile plans to complete the homologation of the e.GO Mover in the vehicle classes M2 (People Mover) and N1 (freight transport). In the second quarter of 2020, the new assembly plant in Aachen is also to go into operation and around 250 e.GO Movers from series production will also be delivered in 2020. According to an accompanying press release, the production of more than 2,000 units is already planned for 2021.

The cargo version of the electric commercial vehicle, with its low-floor concept and cubic design, is expected to score particularly well with commercial operators. The manufacturer promises “an above-average interior size and very good accessibility”. Like the first representative of the Mover family, the People Mover, the Cargo version can also be equipped with a fuel cell range extender on request. To remember: the People Mover, which was unveiled in 2018, has nine seats and six standing places and should be able to drive for up to ten hours in the city centre (without the range extender).

This applies to both the passenger conveyor and cargo variants: the platform will be approved for highly automated driving. The current e.GO Mover, which was initially driven purely manually, can be scaled up to autonomy level 4, according to the press release.

Meanwhile, the parent companies are announcing that the introduction of the Cargo version of the e.GO Mover will change the ownership structure of e.GO Moove GmbH, which was founded in 2018. To date, ZF has held 40 per cent of the joint venture. At the beginning of 2020, the supplier group from Friedrichshafen will exchange its shares in e.GO Moove GmbH for shares in e.GO Mobile AG, the partners announced. “The realignment is intended to create greater synergies in the cooperation between the two companies”. However, the joint development work with ZF as the main supplier for the electric drive, brakes and steering as well as technologies for automation will be continued.