Dozens of activists blocked an Amazon distribution centre outside Paris on Thursday to protest the environmental damage they say is caused by rampant consumerism during “Black Friday” sales.


Between 50 and 100 activists from the Non-Violent Action COP21 and Friends of the Earth groups used bales of hay and human chains to block the Amazon depot in Bretigny-sur-Orge, about 40km south of Paris, according to AFP journalists at the scene.


Some held banners reading “Amazon: for the climate, for employment, stop expanding, stop over-production,” while others used old electrical goods to block the path of trucks trying to enter the site.


READ ALSO Why France might be banning Black Friday 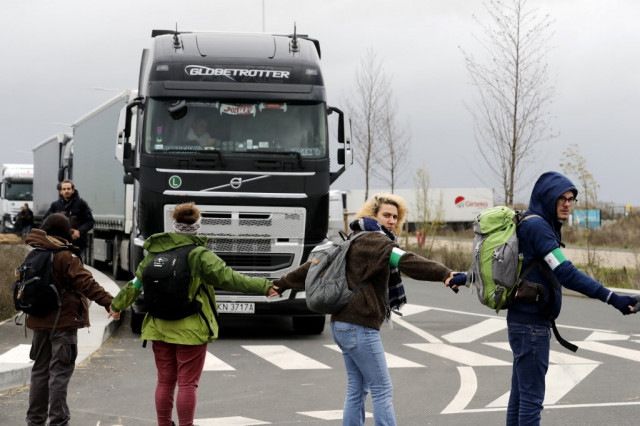 The protest took place on the eve of the Black Friday sales, a tradition that originated in the US on the day after Thanksgiving but has gone global in the past few years.


The activists say the surge in deliveries by Amazon and other retailers to shoppers snapping up bargains on everything from phones to furniture and clothes add to greenhouse gas emissions.


Paris is considering new rules, including a tax on deliveries, to ease the traffic jams and pollution caused by Amazon and others, Mayor Anne Hidalgo’s deputy in charge of urbanism, Jean-Louis Missika, said in an open letter published on Monday.


It claimed Amazon alone would deliver 2.5 million packages a day in Paris during the Black Friday sales, ten times more than normal.