President Trump’s ‘America First’ approach has relied on slapping tariffs on countries, such as China and Mexico, which have led to current trade wars. What is a tariff and how do they work? We explain.
Just the FAQs, USA TODAY

The ongoing trade war with China is starting to affect Knoxville-based JTV, or Jewelry Television, which has 1,400 local employees.

“China is very important to us in the jewelry industry,” said Crawford Wagner, JTV chief financial officer. “Forty-six percent of what we buy on an annual basis comes from China.”

Over the years JTV, founded in 1993, has built a supply chain heavily reliant on Chinese imports – some raw materials, but mostly finished jewelry, he said. Almost all freshwater pearls are grown there, and it’s the sole source for things like Chinese peridot, Wagner said.

“Now were working like crazy to modify the supply chain,” he said. They’re building arrangements with manufacturers and vendors in Thailand, and expect that business to grow, Wagner said.

The outside of the Jewelry Television Headquarters on Jan. 12, 2017. (Photo: Calvin Mattheis/News Sentinel)

Prior to President Donald Trump’s trade dispute with China, JTV paid a standard 5.5% customs duty on silver and 5% on gold from that country, Wagner said. The round of tariffs, which went into effect Sept. 1, added 15% and another 15% is due in effect Dec. 15.

The lists of affected items include pearls, gemstones, gold and silver jewelry, chains, costume jewelry and related items. That covers “99%” of what JTV buys from China, Wagner said.

“To this point it has not had an impact on our pricing, but if it continues – if the tariffs do continue – we’ll have to make adjustments,” Wagner said. It has not, so far, affected the number of jobs at JTV, he said.

Scope of the problem

In June, Wagner testified before the U.S. International Trade Commission’s committee studying application of tariffs on Chinese goods. He told the committee JTV is “principally owned by our employees,” with its 24-hour, 7-day-a-week programming reaching 82 million households. 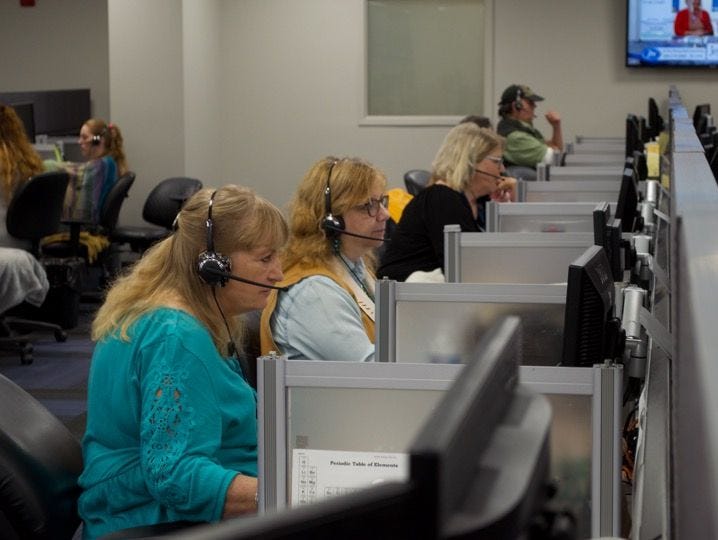 “We support the administration’s efforts to level the global playing field when it comes to trade,” Wagner told the committee. “There are indeed many bad actors who have taken advantage of the U.S. This unfairness, however, is not the case with China as it relates to the jewelry industry.”

Instead, Chinese raw materials and factories are vital, and as of June it had been impossible to find the same quality in other Asian countries, he said.

JTV buys $190 million a year from outside the country, including $87 million from China, and many of those products aren’t available from within the U.S., Wagner told the committee.

The company’s average item price of less than $100 is “not possible to achieve” without the international sourcing JTV has developed over years, he said.

Under a 2018 U.S. Supreme Court decision, JTV is now paying tax on internet sales, which cut the company’s sales by about 10% and its profits by one-third, Wagner said.

Sudden addition of tariffs would have “draconian” impact on the company and its customers, he said. Wagner asked for a jewelry-industry exemption, or at least a phased approach to provide time for building new supply chains.

In September Matt Murray, associate director of the Boyd Center for Business and Economic Research at the University of Tennessee, said Trump’s trade war with China was already beginning to bite Tennessee businesses.

Distilleries and soybean farmers were the first to hurt, but as tit-for-tat tariff increases continue, more products will be affected, he said.

Murray is a specialist in public policy and government tax policy. For more than 20 years he has done economic forecasts for Tennessee and the Tennessee Valley region.

Tennessee has 857,200 jobs dependent on global trade, the U.S Chamber of Commerce estimates. That’s more than one-quarter of all jobs in Tennessee, according to the Bureau of Labor Statistics.

The U.S. did $737 billion in trade with China in 2018, making each country the other’s largest trading partner, according to the U.S. Trade Representative’s office. The U.S. imports nearly twice as much from China as it sells in return. 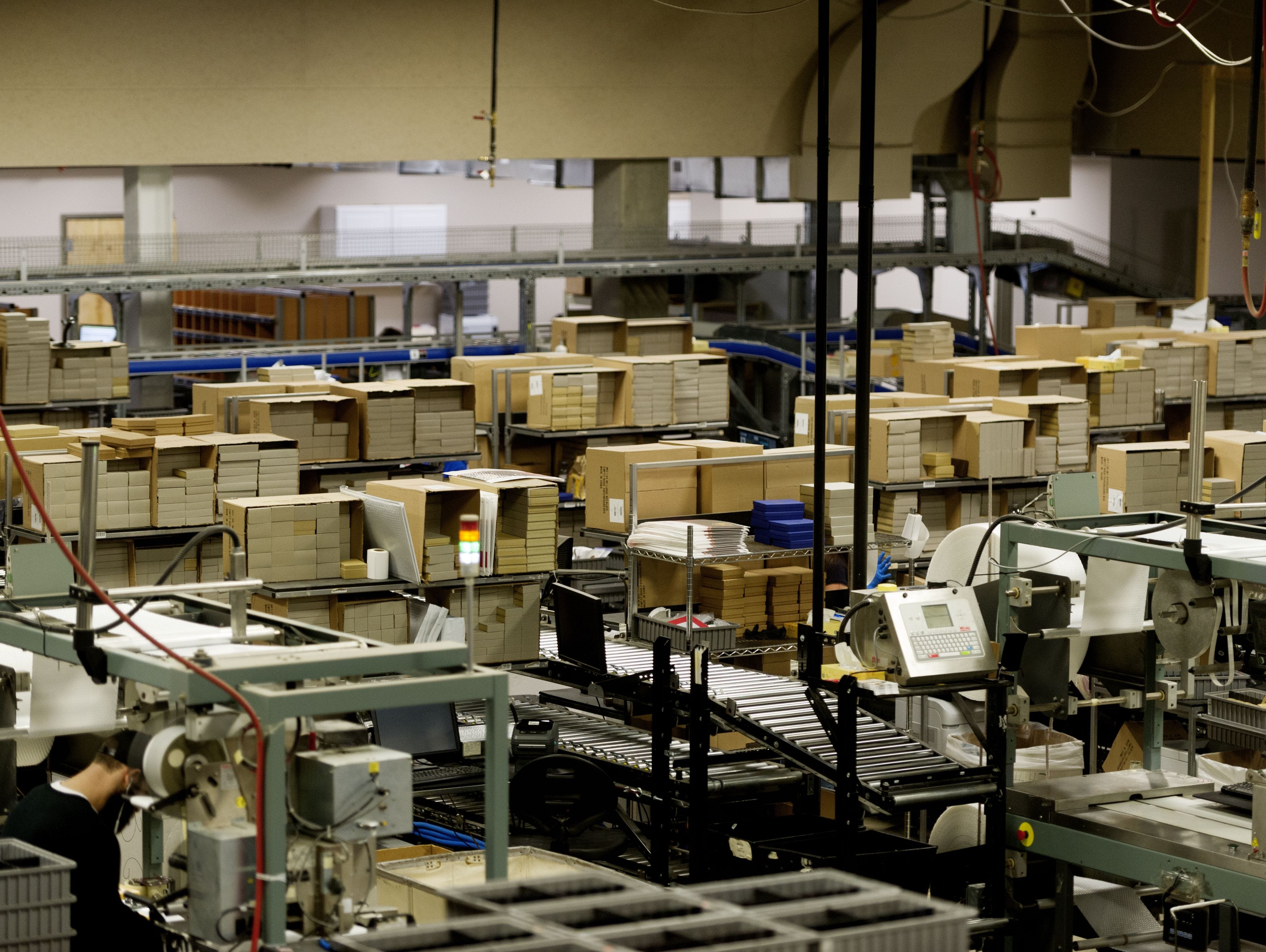 The shipping room of the Jewelry Television Headquarters on Thursday, January 12, 2017. JTV is seeing about 15% in sales growth at a time when the jewelry market is down. The company is also finishing up a three-phase building expansion, including an automation system and more inventory space. (Photo: Calvin Mattheis/News Sentinel)

The chamber lists Tennessee as one of 29 states suffering an “extremely significant impact” from the trade war. Tennessee exports $2 billion in goods and services to China, which will be affected by retaliatory tariffs, according to the chamber. Car parts, medical instruments and computer equipment are the Tennessee-manufactured goods to be hit hardest, the group says.

China, in return, hiked duties on dozens of U.S. products, including oil, soybeans, beef and pork.

How long the trade war continues affects how long recovery will take, Murray said. The agreements and personal contacts that built up supply chains could take years to repair, he said.

If the new tariffs were removed “tomorrow,” JTV’s recovery time would be short, Wagner said. China would remain an important supplier but less important than before.

“Ideally we’d like to continue to do business in China,” he said. “But if that’s not the direction of the country, we’ll support that and make adjustments accordingly. We just can’t make adjustments in such a quick timeframe.”

But with Trump himself saying Tuesday that the 17-month-old economic impasse with China is likely to continue beyond the 2020 presidential election, JTV is “going full steam ahead to get as much business as we can out of China. It just takes time,” Wagner said.

Want to stay informed on business?: Subscribe to Knox News.

JTV is filing a request for its jewelry items to be excluded from the tariffs, Wagner said. The filing deadline is the end of January, but even if that request is approved, it’s unclear whether such exclusion would be retroactive, he said.

The company should be a prime candidate for such exemption because of how hard it’s working to move its business out of China already, Wagner said.

“We believe the best tax policy is done gradually, over time and is not abrupt,” Wagner said. “That’s what we’ll be asking for, is time to make adjustments to the supply chain.”