London —
LNG shipping rates remained near 10-month highs Tuesday as US sanctions on a Chinese shipping giant led to a vessel shortage in both the Atlantic and Pacific basins, S&P Global Platts data show.

Reload opportunities for Atlantic Basin traders to move cargoes east to take advantage of the rising Asian market are limited though.

The rally in freight rates has eaten into or shut arbitrage incentives to reload LNG, and while the spike is thought to be short-lived, LNG may continue to respond to lingering strength in freight rates, according to sources.

The Platts LNG freight rate for cargoes loading out of Zeebrugge, Belgium to Japan or South Korea hit $3.36/MMBtu October 17, its highest level since December 2018. The shipping rate has remained little changed since then and was assessed at $3.33/MMBtu Tuesday. 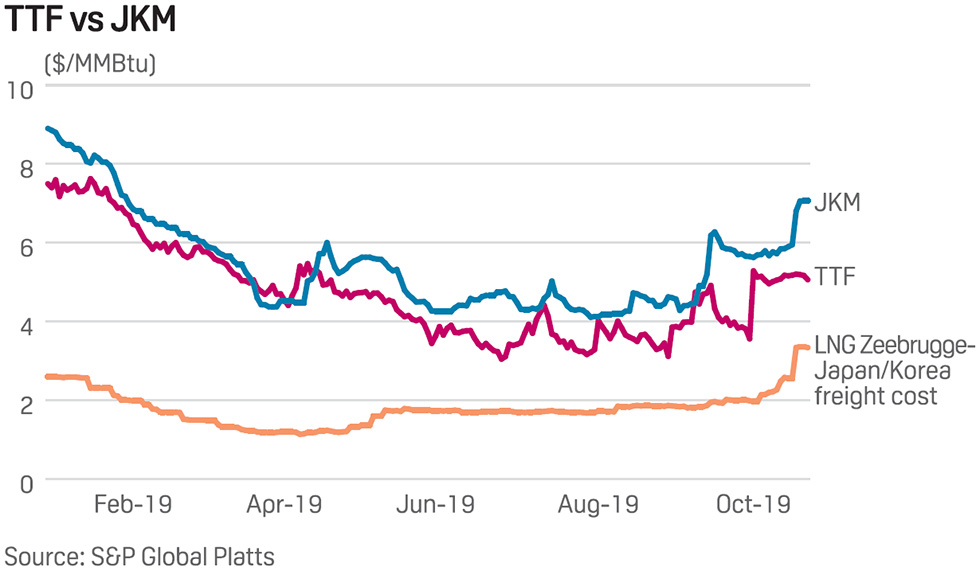 Europe looks set for more LNG imports in the near term as the TTF and NBP prompt months are due to retain premiums to the JKM spot price amid the rising charter costs to Japan and South Korea, traders say.

US sanctions against subsidiaries of Chinese shipping company COSCO triggered spot requirements for loading out of Tangguh, Indonesia, and Australia, as at least five vessels part-owned by COSCO subsidiaries could not carry out loadings.

“Part of the higher rates is because of the US sanctions. But if a trade agreement is reached between US and China, what will then happen?” a Germany-based natural gas trader said.

Despite a number of specialized Arc7 icebreaker vessels serving the Novatek-operated Yamal LNG plant in northern Russia no longer being subject to US sanctions, they are not active in the spot market and unlikely to put any pressure on freight rates as a result.

European LNG market participants are anticipating a swathe of arrivals in early November.

A London-based trader said the volume of cargoes arriving in November will balance fundamentals slightly by taking length out of the market.

Another London-based trader said he believed cargoes are likely to remain stuck in the Atlantic Basin for now, despite expectations of lower shipping rates as the spread between TTF and JKM is not wide enough yet for most traders to reload and send LNG to Asia.

The spread between the Platts Northwest European second half of November price and the JKM H2 December price currently sits at $2.106/MMBtu, as of Tuesday, Platts data showed, making Europe the more attractive destination for spot Atlantic LNG cargoes.

The Platts JKM, the benchmark Asian LNG price, was last assessed at $6.817/MMBtu, and despite showing signs of recovery since mid-March, the Atlantic arbitrage to Asia – Atlantic LNG cargoes diverted to Asia – remains largely closed with shipping rates where they were assessed Tuesday.

European regasification rates have remained strong as a result, with sendout across the UK, Belgium, France, the Netherlands, Italy and Spain at 208 million cu m/d Monday, data from S&P Global Platts Analytics shows. This represent a 30% increase compared with Gas Year 2018 and a near threefold increase from GY-17’s regasification rate.

LNG volumes are set to remain strong since US exports continue to mainly head to Europe rather than Asia. The TTF-US Gulf Coast netback has recovered its premium to the JPN-USGC netback in October, with the premium rising to 0.562 cent/MMBtu on Tuesday.

Market participants expect the surge in rates to calm down in the fourth quarter of 2019, leaving room for Atlantic sellers to keep offers into Europe elevated, amid a well bid Northeast Asian market for December. Offers for cargoes delivered into Northwest Europe for December are currently heard flat to TTF.

For now though, Atlantic sellers remain incentivized to keep cargoes within the basin as the current strength of freight rates does not favor longer journeys.

Further out, Atlantic Basin market participants will be watching for the possibility of a prolonged cold snap in Asia, which could lead to Atlantic cargoes being shipped eastward, and eating into the vast volume of gas in storage at European terminals.

Other supportive factors in the Asian market include South Korea’s KOGAS seeking higher volumes heading into the winter months, according to market participants.