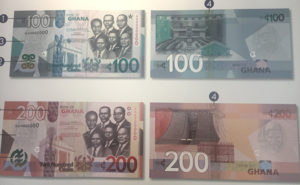 The Minority Leader in Parliament, Mr Haruna Iddrisu, has called on the Bank of Ghana (BoG) to provide full details for printing the new GH¢100.00 and GH¢200.00 notes to show transparency and accountability.

He said Ghanaians deserved to know from Government the full procurement details and the rationale for printing currency notes of such higher denominations.

“We demand better and further explanation from the NPP [New Patriotic Party] Government and BoG for the cedi denomination of such magnitude to be printed without a notice to the Ghanaian public,” he said.

Mr Iddrisu who is also a Member of Parliament (MP) for Tamale South Constituency, made the call over the weekend when he commissioned a CHIPS compound equipped with medical equipment and supplies.

He used his (MPs) share of the District Assemblies’ Common Fund to put up the health facility, which cost GH¢300,000.00 at the Duunyin community in the Constituency.

In November 2019, the Central Bank introduced two new higher denominations, GH¢100.00 and GH¢200.00 and a two Ghana cedi coin to complement the existing currencies in circulation.

The MP said it was necessary for government to have pre-informed the public of its intensions and provide specimen of the new cedi notes with public notices countrywide, as to when citizens should expect them among others, before issuing the denominations.

On the Electoral Commission’s proposal to produce a new biometric voter register, Mr Iddrisu said the National Democratic Congress would not accept or support the initiative.

He said the Voters’ Register established in 2012 was still credible given the fact that it had been successfully used recently in the local elections and other national assignments affirmed its credibility.

“We know that the same Voter’s Register that the NPP is trying to discredit, was the same register that was used to elect the NPP government into power, used in the referendum for the creation of additional new regions and election of assembly members among others,” he stressed.

“We don’t need a new voter register for the 2020 elections.”