Oil Drops On “Surprise” Inventory Build, While Future Gains May Be Impacted By Shale Slowdown

Oil Drops On “Surprise” Inventory Build, While Future Gains May Be Impacted By Shale Slowdown 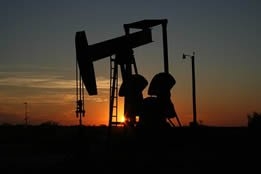 After days of mounting evidence that the crude market may not be as calamitous as has been portrayed and the U.S. and China still on track to reach a trade agreement, traders on Wednesday experienced a sudden surge of pessimism and caused oil prices to drop, based on an unexpected growth in U.S. inventories.

Brent settled down 21 cents at $64.06 per barrel, and West Texas Intermediate dropped 30 cents to $58.11 per barrel after the Energy Information Administration disclosed that U.S. crude stocks swelled by 1.6 million barrels last week (analysts in a Reuters poll had forecast a 418,000 barrel drop) and gasoline inventories soared 5.1 million barrels (compared with expectations for a 1.2 million barrel gain).

The growth was buffered somewhat by reports that U.S. oil drillers reduced the number of rigs for a record 12 consecutive months – and by persistent hopes that a U.S./China trade deal will be struck before the end of 2019.

Brian Kessens, portfolio manager at Tortoise, said of the inventory numbers, “Given the time of the year, we anticipated refinery utilization to tick back up as we come through the fall and turnaround season, so this was a surprise build.”

Meanwhile, if the perspective of Texas wildcatters has any gravitas, the crude market for the long term may remain in the doldrums rather than benefiting from geopolitical breakthroughs.

Bloomberg quoted Frank Lodzinski, chief executive officer at shale explorer Earthstone Energy Inc., as dismissing the predictions from the International Energy Agency and the EIA of robust U.S. production growth next year: “I can’t remember another time when oil was $55 and the industry was in such shambles.”

Bloomberg noted that more than 1,000 layoffs have been announced this year as drillers and their hired hands seek to cut costs, and it reported that “a number of producers have run into disappointing results from wells that were placed too close together”; plus, David Ramsden-Wood, former chief operating officer of Franklin Mountain Energy, was quoted as saying that in the top five shale basins, wells that came on in 2018 are declining at their fastest rates yet.

But as always with media and especially analytical processing, the crude market’s health may lie between soaring optimism and outright pessimism, and the notion that the truth is elusive was demonstrated by John Kemp, commodities analyst for Reuters, who proclaimed to be puzzled by China, “where reported [oil] consumption is rising at rates inconsistent with the country’s slumping auto sales and slowing economy.”

He speculated that “China’s fuel distributors and consumers have most likely taken advantage of lower prices to boost the amount of products held at fuel depots and in end-user tanks before prices rise again.

“If that is the case, much of the increase can be accounted for by a one-time shift in the location of stocks rather than a sustainable increase in consumption and it will likely unwind if prices rise again next year.”