Opinion: Opportunities for produce in Jeddah

Opinion: Opportunities for produce in Jeddah 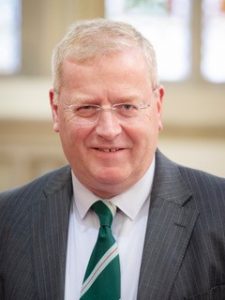 With a population of some 33 million, Saudi Arabia is the largest of the Gulf States and whilst Riyadh, the capital, is the administrative center of the country, Jeddah, with a cosmopolitan population of 4 million, is known as the commercial hub.

Its location on the Red Sea Coast sees it act as the main conduit in the country for imported produce. This comes from the likes of South Africa, Chile, Central America, the US, European countries such as Holland, France and Italy in particular, and New Zealand. These imports include bananas, apples, citrus, stone fruits, grapes and some exotics and high-quality vegetables. China and Indian supplies dominate the market for products such as garlic and onions. The Philippines is a key supplier of bananas.

Some 50% of these imports are then redistributed to other parts of Saudi Arabia. Produce imports from the Southern Hemisphere and Asia are supplemented by arrivals from the so-called MENA countries (Middle East & North Africa) – Turkey, Egypt, Jordan, Lebanon and Syria (in the past). These normally come by truck and sometimes by sea freight.

Added to this there is the supply of more local tomatoes, cucumbers, cabbage and other vegetables, often from the region known as Taif.  Farm production in Saudi is, however, constrained by issues such as water and labor availability and then the overall small scale of activity. There is a trend towards the consolidation of smaller farms and the emergence of more professional produce collection and packing stations in key production areas.

All this makes Jeddah a veritable melting pot of buying and selling of produce from around the world. It creates a highly competitive market environment where everything comes down to a subtle combination of price and quality. Leading traders often cite that Jeddah is used as a dumping ground for international produce, but still accepts supplies. This is on the basis that their range of national and pan-regional contacts across a diverse customer base means they will always find a market for all produce – somewhere.

Imports are dominated by the so-called Cold Store companies – the best known of these is Sharbatly. This business was formed over 60 years ago and now has 12 branches across the whole Kingdom and three branches in Dubai, Bahrain and Egypt.  They have a seriously impressive infrastructure in terms of cold stores, ripening facilities and distribution, with a customer base made up of the leading retailers, hotels and restaurant chains. 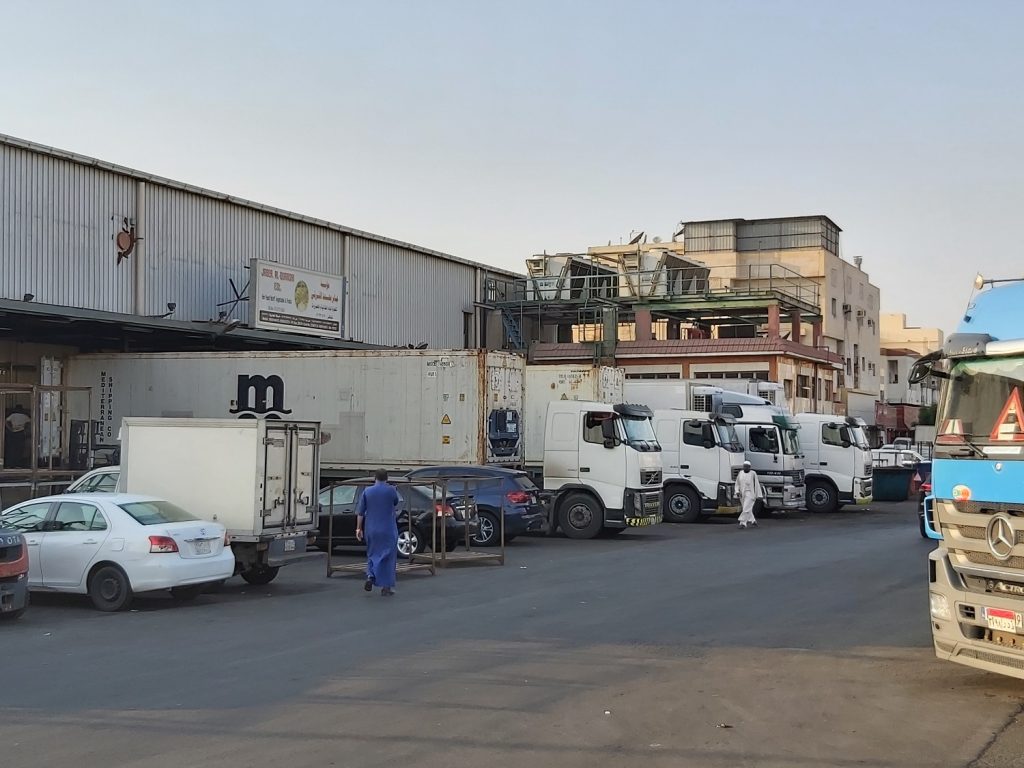 There 10 – 12 other cold stores located in Jeddah, but Sharbatly is clearly, the “leader of the pack”. It is still a family-owned business, but has strong connections around the rest of the world with the leading produce suppliers, including its own integrated production in South Africa and Chile.

Much of the produce in Jeddah finds its way to the central wholesale market – the Halaga -this literally means “the auction” in Arabic. Here there is a myriad of activity from conventional wholesaling, small scale retailing as well as daily auctions.

All the leading supermarkets have buying operations based at the Halaga to coordinate supplies but produce often physically bypasses the actual market facility. Deals are done on a direct basis with suppliers. The auctions take place twice per day – from 6 in the morning until 12 noon and then again in the evening.

On arrival, trucks are literally parked up, the back doors opened and produce auctioned off – it’s quite a sight! This process helps set the base price in the wider Halaga market for the next trading period.  While relatively quiet during most of the day, the Halaga really comes to life in the evening

The market, physically situated in the city center, is now choked with traffic; having been originally built in the 1970s it is beginning to show its age. There are poor produce handling facilities and very limited cool storage in high temperatures of up to 40 degrees. As a result, wastage rates are very high. 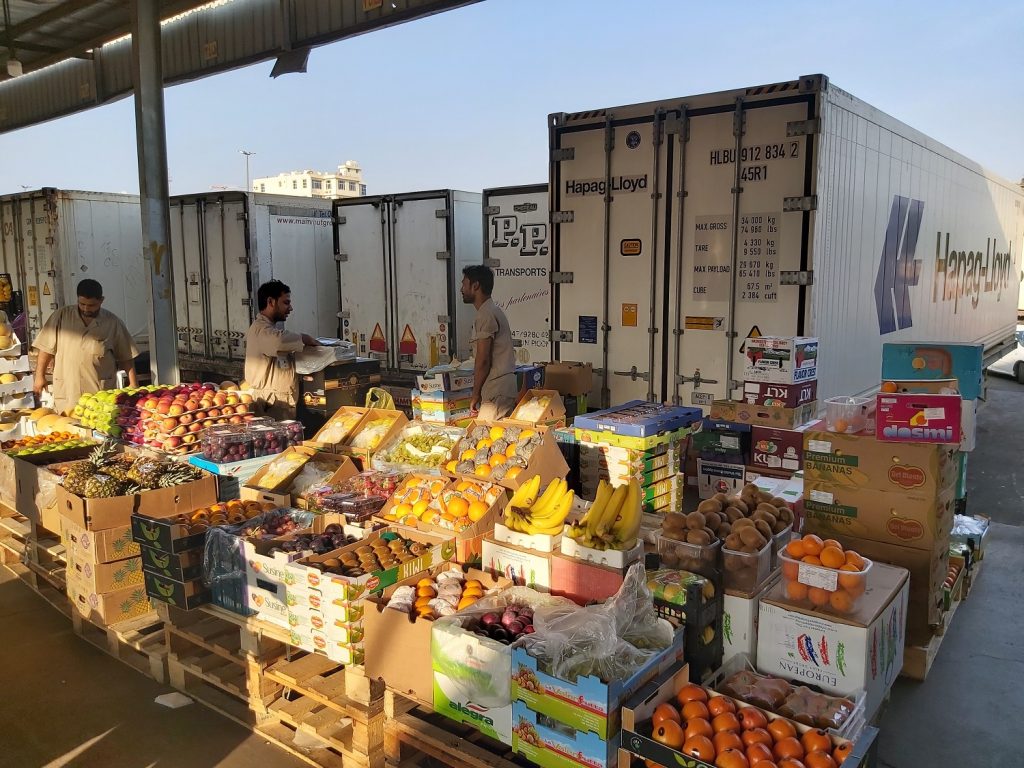 There are now ambitious plans to relocate the market facility to an out of city location – as part of a huge regeneration program of which the wholesale market will be just a part. There could potentially be other facilities such as restaurants, entertainment complexes, residential housing, offices, a vertical farming operation, retail outlets and leisure facilities, as part of the wider site design. Nothing is done by halves in Saudi.

The retail sector is dominated by Panda which is the largest food retailer in the Middle East. Panda is owned by the Savola Group and has more than 400 branches of Panda Super, Panda Hyper and Pandati in Saudi Arabia & Egypt. Carrefour from France is the leading international retailer operating in Saudi.

There is a booming hotel and restaurant sector in Jeddah, not least as a result of the government policy of making Saudi Arabia a more open economy in the future – both economically and socially – under its Vision 2030 Programme. All the major retailers and hotel chains operate to international standards. Jeddah also has a particularly cosmopolitan consumer base made up of indigenous Saudis, other Arabs, Europeans, Asians and Africans.

With an increasing population, predicted to increase to some 40 million by 2030, and a young demographic – over 25% of the population is under the age of 20 – demand for food and fresh produce is expected to increase significantly over the next 10 years.

Success in this part of the world is in some ways no different from others. Selection of the right partner is critical. Understanding the market per se, consumer and customer behavior – why wouldn’t you do that?  Having a good grasp of the overall political and key social drivers for change is essential. Knowing who you are competing against and what the size of the price is should be a given. But hey – Saudi Arabia – why not?

John is a Divisional Director with Promar International, the value chain consulting arm of Genus plc.  He has worked on produce assignments in some 60 countries around the world and this includes current projects in the Middle East.  He is also the President of the Chartered Institute of Marketing’s food, drink &agriculture group in the UK and can be contacted at [email protected]