Security Risks In The Supply Chain

Security Risks In The Supply Chain

Semiconductor Engineering sat down to discuss security in the supply chain with Warren Savage, research scientist in the Applied Research Laboratory for Intelligence and Security at the University of Maryland/DARPA; Neeraj Paliwal, vice president and general manager of Rambus Security; Luis Ancajas, marketing director for IoT security software solutions at Micron; Doug Suerich, product evangelist at the Peer Group. What follows are excerpts of that conversation.

Ancajas: Manufacturers are going to start adding security into their products, making sure they are not tampered with or cloned, or capable of being disrupted in the field. The best way to secure the supply chain is to not have security based on specific manufacturers or dependencies on specific flows, which make it hard to port the the manufacturing of a specific system from one location to another location. So streamlining the way security is added is an important step. It will make a company more agile. And in case of disruptions, we need to see more sharing of secrets up and down the supply chain. As much as everyone wants to hold onto a secret sauce, if you go too far in that direction you create a very fragile ecosystem. The key is to have more information spread around while still preserving economic benefits for individual companies.

SE: How do you accomplish that when the idea is that the best technology wins, but reliance on any particular vendor can create a single point of failure?

Suerich: You’re going to have a situation where you’re not going to be able to guarantee the supply. One of the things that has to be done is to ensure where all the pieces are all the time.

Savage: There’s actually an interesting new standards effort going on at SEMI right now around single device tracking. That’s a block chain strategy that will allow every part of the design flow to be tracked by all the relevant parties. You can see where the pieces are moving. This is outside of geopolitics, but in the end you have to assume that capitalism is going to rule the day.

Suerich: As much as it might be a single source where you a single supplier for a particular component, that’s often a profit-based motive for your going to the absolute best option. The number two option is often ‘good enough,’ and that second choice is going to be available. But you do need to have awareness of this, and be agile enough to flip to that second choice when necessary.

Paliwal: In regard to the first part of the question, we are going to see more than one global supply chain. Like you mentioned with China and South Korea, these are the result of geopolitical issues that are unfolding right now. I was at a conference where a professor from Yale said he was building financial models around two supply chains to determine what the economic impact would be based on where these components or chemicals are coming from. The situation is still unfolding, but there is a real danger of having more than one global supply chain from the standpoint of trust.

SE: The United States has one trusted foundry now, which is at 28nm, and does not have any prospects for more advanced nodes. What’s the impact of that, and what happens if we do end up with two supply chains?

Savage: It’s important to have some of these trusted boundaries with certain applications. But another thing we realized at DARPA is that supply chains are inherently untrustable. You can’t rely on the supply chains for security. The weakest point in supply chain security is not a technology. It’s a single individual. It may be the guard or the receptionist who allows you to get access. There are all kinds of vulnerabilities, and one person can bring the whole thing down. A supply chain is not controlled by technology alone. It’s controlled by the owner of a chip. Our position from a security point of view is a traditional military type of a situation. Think about a castle with a moat, a wall and an inner chamber. We assume the enemy will cross the moat and climb over the wall, and now that they’re inside we have to protect a box in the middle of the castle. So we’ve narrowed the scope of the problem, regardless of technology and trade treaties. We’re all engineers and scientists, and we need to use our knowledge to establish a paradigm for how to secure this global supply chain. 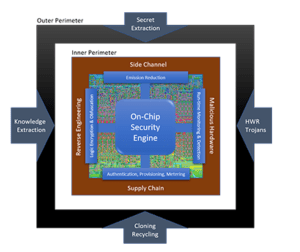 Suerich: You’re never going to create the perfect moat or fence, and for the supply chain it’s going to be similar. We’re not going to have perfect security, but knowing when something has gone wrong allows you to try to deal with it. We need to be able to discover, possibly through traceability initiatives using blockchains, when someone has tampered with a component in supply chain. And then we need to be highly reactive to the problem.

SE: In the past we didn’t really have to think about those because a lot of the products and the value of the data that was coming through there wasn’t nearly as high as it is today. The idea of hacking into a car, for example, seemed absurd. Now we have threats like ransomware. How do we secure all the IP and software? And is that even possible?

Paliwal: This is a multi-layered issue, particularly with assisted and autonomous driving. It starts at the silicon level, then goes to training for ML, and then it goes all the way up to how a systems actually works with microcontrollers and all of the electronics inside that system. The idea of putting something in silicon that gives it a unique identity that you can trust, from the manufacturing supply chain as well as its entire lifecycle, is one aspect of this. In the AI domain, if you having checked that the asset you most need to protect is in some way secured, then you need to find some way to do that. When you move into inferencing or training in AI, the attack vector and surface area increases 1,000-fold. It’s not just the keys. But now, if you are one of the Super 7 cloud companies, the other ones should not know what you are doing. So there’s a proprietary element, to this, as well. And then there are adversarial attacks on the AI. If I understand exactly the code behind the algorithm and how it is being used, like in photography, I can very easily inject the right amount of noise to create a different output. So how do you actually encrypt those things and how do you plan against those adversarial attacks in software? That is a whole new area where research is being done. We’re doing some research in this area, as well.

Savage: The hardware-software interaction is very important. One of the best papers on this subject is ‘Seven Properties of Highly Secure Devices’ from Microsoft. There are layers here, and there’s detection alerts that are needed. ‘I’m being attacked. What are the countermeasures that I’m going to take?’ That’s a combination of hardware and software.

Ancajas: The systems have grown to the point where they’re more important, and there’s more assets being put onto those systems. So now you’re trying to lock all of this down using silicon, but the surface area can be large when you do that. An SoC has a lot of portals, and as we’ve learned, you actually can attack a workstation from inside the cloud. Another area that is wide open is the flash memory. Nothing is protecting the flash memory. So you’re going to see newer evolutions in silicon technology where even the memory is protected. That’s a good place to start protecting more and more of the assets that are coming into the system.

SE: There has been a lot of talk about Trojans, but that has been primarily from the military. More recently, we’re also hearing about vulnerabilities with Foreshadow, Meltdown and Spectre using branch prediction and speculative execution. How real is the threat, and how much of this involves the supply chain versus just a single flawed design?

Paliwal: Hardware attacks are going after the silicon most of the time. You start with a secure element in the memory controlled by a siloed co-processor that actually implements the whole metal layer ‘kill chain.’ So when you model this, you have to model it with the understanding that you will be attacked, not that you may be attacked. Then the whole kill chain is modeled around how do you get out of it. For the typical silicon chip, you need the ability to securely boot even if you do firmware over-the-air updates where you have some malicious content or software, or you have had an attack that has infected the device. You need to be able to get it back to working condition. There are new cases that are memory-specific, where you have to discard the device. But we all have phones where we get over-the-air updates, and they have security built in so they can never be permanently infected.

Savage: It’s a good question. Trojans are definitely real, and people don’t like to talk about them very much for obvious reasons. But we’re in increasingly perilous situations, especially with so much third-party IP popping up from all over the world. For most Trojans there is an activation and a payload. These activations can be extraordinarily long. They might take months, years before they activate. Those are very hard to detect, and maybe it’s from a company you’ve never dealt with before. One of the more interesting things I’ve seen in my short time with DARPA is that there is very little difference between a hardware Trojan and a new bug. An unintended trigger and an unintended payload is kind of like a bug. I’m encouraged to see some university research on this and EDA-types of techniques for detection of these things. We’re at the early stage of this.

SE: Algorithms are being updated on a regular basis, so whatever you’re putting into a system will change over time. How do you account for that, particularly when it involves a third party that may be on the other side of the world?

Ancajas: In many ways it’s not much different than what we do with test. You’re testing what you get from your supplier to see if there’s a bug in there. We probably need more sophisticated methods for testing and evaluating and determining the liability of all these components, wherever they’re coming from.