The EPA testing there detected “many heavy metals including uranium,” which was “not unexpected,” the Michigan Department of Environment, Great Lakes and Energy said in a statement. However, “only one — lead in a single soil sample — exceeded EPA removal management levels, according to the EPA. The water samples were taken from ponded areas on the property.”

The state department noted previous EGLE testing “showed no radiation above background levels at each of more than 1,000 locations on the site, nor in river water upstream and downstream.”

Testing the Great Lakes Water Authority conducted after the November collapse did not detect uranium in its downstream water intake, according to the release Thursday. Tests found several metals, such as aluminum, barium, boron and strontium but authority officials said those are naturally occurring in raw water. 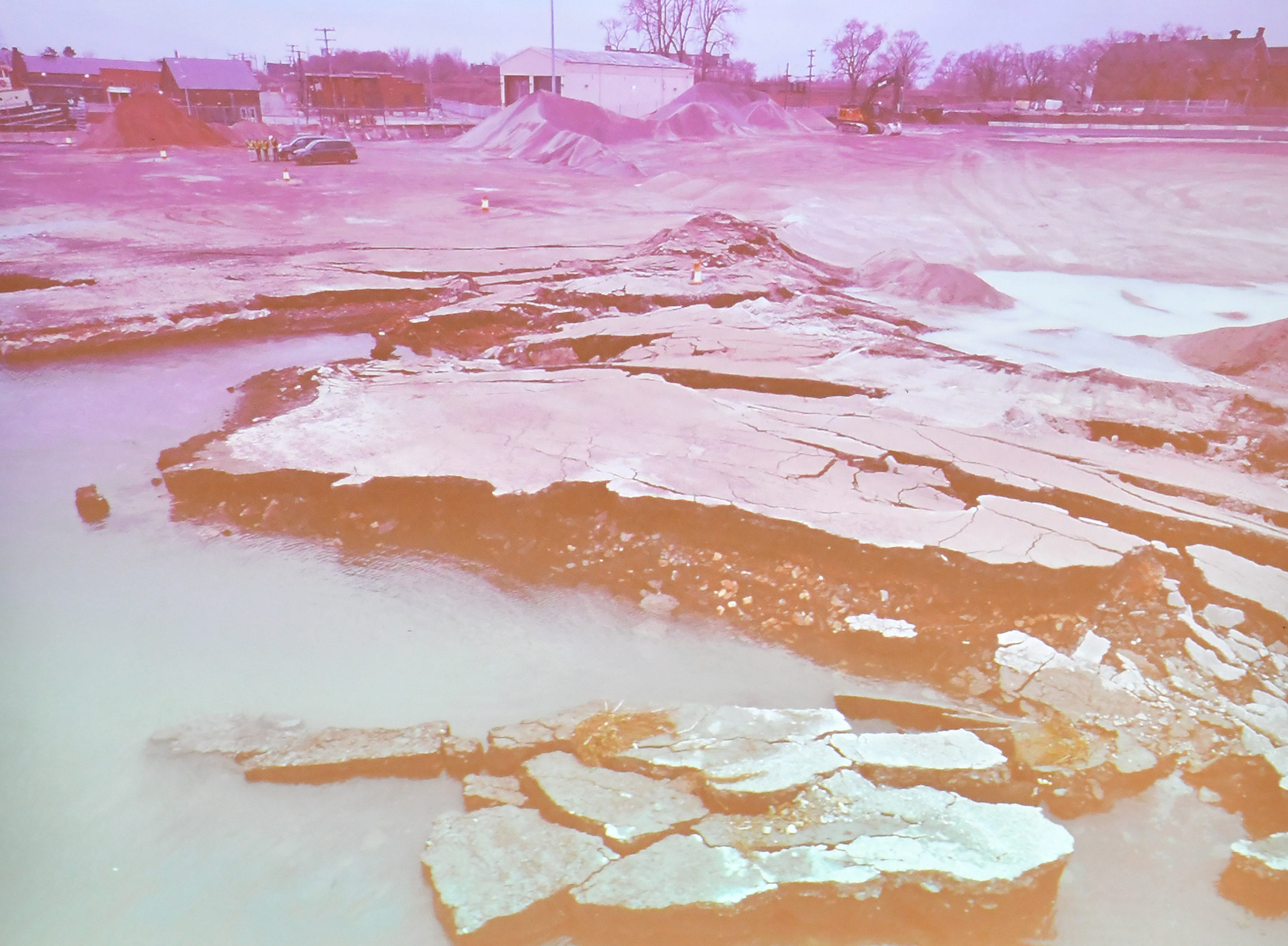 A photo of the collapse shown at the community meeting in response to the Detroit Bulk Storage collapse into the Detroit River at the Cass Corridor Commons in Detroit on Dec. 12, 2019. (Photo: Robin Buckson, The Detroit News)

“EGLE’s analysis of the results and further discussions with the EPA will inform our next steps,” the department said Thursday. “EGLE intends to hold the site’s owner, Revere Dock LLC, and Detroit Bulk Storage accountable and ensure a cleanup that is protective of public health and the environment. EGLE is also in consultation with Revere about missing a Dec. 26 deadline to provide to EGLE and the U.S. Army Corps of Engineers a remediation plan to remove the collapsed aggregate material from the river.”

Officials with Revere Dock and Detroit Bulk Storage did not immediately respond to requests for comment Thursday night. EPA representatives could not be reached.

Detroit Bulk Storage is a sand and gravel storage yard business with a long-term lease on the property.

The limestone aggregate had been stored 100 feet from the waterfront and piled 40-50 feet high along about 300 feet of waterfront.

The site previously belong to Detroit Revere Copper and Brass, which during the 1940s handled uranium and other potentially dangerous materials as a subcontractor under the Manhattan Project that developed nuclear weapons.

From 1943 to 1946, Revere Copper and Brass produced uranium rods at its Detroit plant and during the late 1940s and early 1950s rolled or produced uranium rods, according to U.S. Department of Energy records. Chemicals such as beryllium and thorium were handled on the site, government records show.

The site was considered to have “residual radiation” until it closed in 1984 and the manufacturing facility was demolished. Energy Department representatives visited the site in September 1989, and a “cursory radiological survey at that time revealed no areas with direct radiation levels above background,” according to a 1990 department report. A 1981 survey by Argonne National Laboratory found “no significant residual contamination in readily accessible areas or equipment.”

During a community meeting on the issue in December, Tracy Kecskemeti, the southeast Michigan district coordinator with EGLE, said the department had conducted river sediment sampling and radiation testing earlier in 2019 and “there’s not a radiological hazard on that site.”

Some community members and officials, including U.S. Rep. Rashida Tlaib, D-Detroit, have called for independent testing and stronger preventative measures.

Meanwhile, the Detroit Water and Sewerage Department is pursuing civil legal action against the property owners for a past due drainage bill, officials told The Detroit News Thursday.

“The industrial site, similar to several others across the city, does not have a water service account and prior to 2016 were not billed for the drainage charge,” the water department said in a statement.

“Drainage recovers the cost of collecting and treating stormwater runoff from all properties with hard surfaces across the city. Since October 2016, the parcels have been billed for drainage based on the impervious acreage rate and the responsible party has not made any payments.

“Unlike most Detroit property owners who have been paying the drainage fee for many years. Since there is no water service on the site, interrupting water service for nonpayment is not an option. The account was currently in the collections process.”