The Home Front: Hyper local flowers for your home

The Home Front: Hyper local flowers for your home 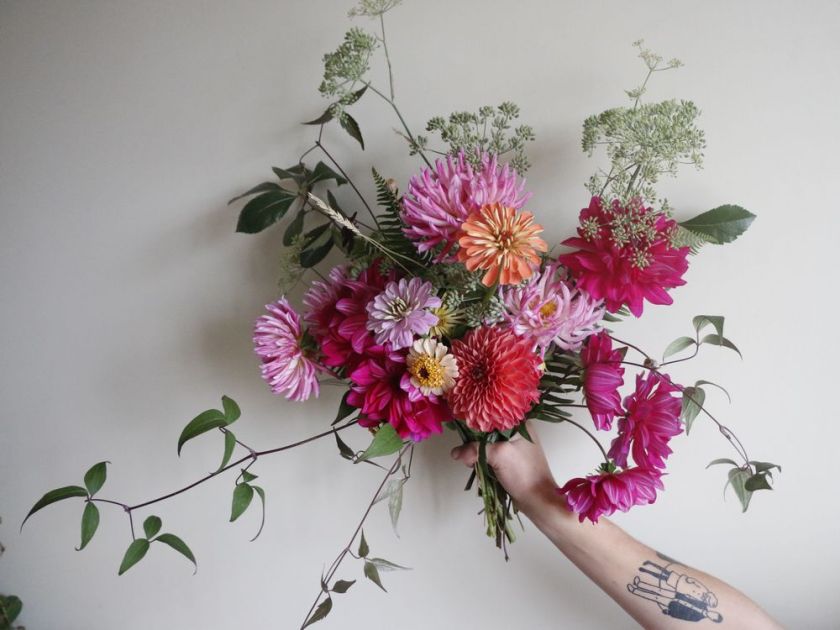 A growing interest in hyper local flowers — those grown in your neighbourhood, rather than being shipped from far away — was the motivation for Amanda Langerak to found Forage and Bloom almost five years ago. That, and a desire to have a business with a small ecological footprint.

Originally from Melbourne, Australia, Langerak grows most of what she sells in her bouquets and flower arrangements in a well-packed garden in the back of her East Vancouver apartment building, as well as gardens she’s cultivated in friends’ back yards. If she’s running short, Langerak says, she’ll contact other local growers and goes to flower markets as well.

Not having a storefront — her business is online and referral driven — has advantages and disadvantages, she says. The disadvantage is that flowers are quite often an impulse purchase, made on the fly by people when they’re walking past a florist or picked up en route to a special occasion, so she loses out on that business. But the advantages, which fit with her desire to have a business that is kind to the environment, is that she only cuts what she sells, avoids all plastic waste and composts anything she doesn’t use.

Operating this way forces you to think outside the box, says Langerak, who uses some plants and flowers in her arrangements that people wouldn’t traditionally think of.

“I use a lot of grasses and thistles and things that are going to add that extra touch to your arrangement. I look at texture and shape, and you can use things like herbs in your arrangement, which will give it a really different feel and give off a lot of scent as well.”

In line with her hyper local approach, Langerak only uses what’s in season.

“Dahlias are a huge part of what I grow for the summer. They’re one of my favourites. And then sunflowers, yarrow, fennel, roses, lots of herbs, chocolate cosmos, lavender and grasses.”

When using flowers to decorate your home, Langerak says the best thing to consider is what colour palette you’re after.

“If you want something really bright, like pinks, then you can use something like orange that will really offset it nicely, and you can get that summer vibrant sunset kind of feeling. Or if you’re wanting something really fresh, go with whites and bright greens with little touches of yellow.”

Langerak does a lot of small weddings and events, along with special-occasion flower deliveries.

“Because I’m a one-person show it’s me that’s making them and delivering them, so I feel like I get to be the vehicle between two people.”

For some people, it’s a bit of a change in thinking to use a florist who works with flowers that are in season and grown locally, Langerak says, because there is less choice.

“A lot of my work doesn’t have tropical flowers, because we don’t have those kinds of flower that grow here. Sometimes that can be difficult when I’m consulting with my clients if they don’t really understand what I do, explaining to them ‘oh I might not necessarily have that available because it’s out of season and I don’t want to source it from Chile or wherever.”

A lot of flowers that are flown in from overseas are overly treated, she says, and not always at their freshest when they arrive.

“You don’t always get the ‘wow-ness’, the scent and the aroma that you would from a flower you’ve grown locally or sourced from around here.”

Langerak says Kokedama, or Japanese moss balls, are a big part of her business. If flowers are the feminine side of Forage and Bloom, Kokedama represents the more masculine side, she says, allowing her to work through the winter when growing flowers outside is not an option.

Langerak will be a teaching a workshop on how to make Kokedama at VanDusen Garden in November.

“People are really getting into plants right now,” she says. “It’s had a really big resurgence.”