the science of medical cannabis derivatives

the science of medical cannabis derivatives 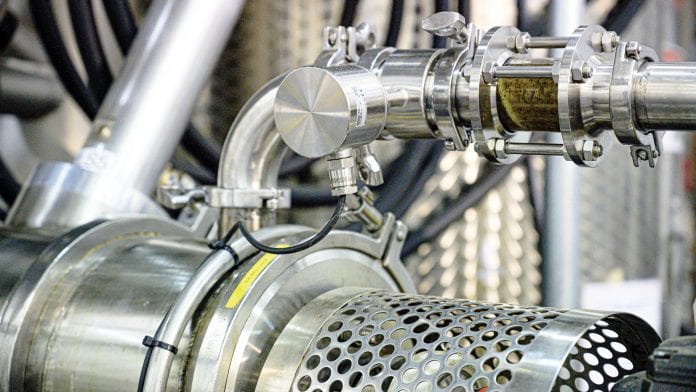 With a proprietary extraction technology that recovers up to 99% of the active compounds from the cannabis plant, Canadian product manufacturing company Radient Technologies is bringing scientific precision to the medical cannabis industry.

Radient Technologies has come a long way over the last two years. Founded in 2001 by Dr Steven Splinter, the company began as a botanical extraction and plant-based ingredient manufacturer. However, after Canada began the process of legalising cannabis in 2016, Radient found itself at the centre of a booming brand new industry that was growing at breakneck speed. Suddenly, Radient was fielding requests from cannabis companies looking for an extraction solution that could meet the industry’s increasingly specific demands.

While there are various methods for extracting the active compounds out of plant materials, Radient’s proprietary extraction technology is unique for several reasons. First, it is based on a continuous-flow method which allows for much higher volumes of cannabis biomass to be processed in much less time than existing extraction methods.

While there are other ways to extract cannabinoids such as tetrahydrocannabinol (THC) and cannabidiol (CBD) from cannabis biomass, these methods have limitations when it comes to scaling up to suit mass production. Typically, companies using other methods such as Supercritical CO2 extraction, for example, will have to purchase additional machines and equipment in order to scale up their production, which means hiring more operational staff, using more energy and solvent, and perhaps leasing more operational space.

Radient can scale up production to industrial scale volumes easily without the need to purchase an endless supply of new machinery, thanks to a proprietary, continuous-flow platform that does not rely on pressurised batch vessels. This means higher rates of consistency and quality are achieved because Radient’s process doesn’t require stopping and restarting material flows. As a result, additional machine time and human labour are generally not needed.

In addition, Radient’s extraction method completely eliminates additional steps required in most extraction methods, such as winterisation (the process whereby solvent and cold temperatures are used to separate lipids and other desired oil compounds from waxes), which typically adds at least a half day to the extraction process. Radient has effectively fine-tuned its process so that it does not require winterisation, which means the company can manufacture various end products, particularly those focused on medical markets, much faster than would be possible using other extraction and processing methods.

Another factor that sets the company apart is their ability to achieve what is called ‘full spectrum’ extraction efficiency. Whereas the typical recovery of active compounds using Supercritical CO2 hovers around 70-80%, Radient has reported it can recover up to 99% of the active compounds from cannabis biomass. This means that Radient has access to a wider range of cannabinoids and the accompanying active compounds that are unique to each strain, such as terpenes.

While the cannabinoids THC and CBD are arguably the most well-known of the cannabis-derived cannabinoids, there are actually more than 100 different cannabinoids that have been identified in the cannabis plant so far, and the human body has receptors that bind to each of these.

The two main receptors, categorised as CB1 and CB2 receptors, are part of the endocannabinoid system (ECS), which can be found in all mammals, birds, reptiles and fish. CB1 receptors are mainly found within the brain/central nervous system, while CB2 receptors are mainly located within the gastrointestinal (GI) tract, where most of the body’s immune system is located, as well as many of the body’s major organs. When cannabinoids from the cannabis plant enter the body and interact with the cannabinoids that exist within the human body (called endocannabinoids), they activate the receptors of the ECS, facilitating neurotransmitter release and thus having various effects on the body and brain.

The ECS is still being studied in great detail, having only been discovered in the 1990s by Dr LA Matsuda. What we now know is that the ECS helps fine tune many of our vital physiological functions. In fact, in recent years the ECS has been recognised as one of the most important physiologic systems involved in establishing and maintaining human health. Scientists have discovered that the ECS helps modulate the regulation of homeostasis across all major body systems, affecting everything from sleep to appetite, pain, inflammation, memory, mood, and reproduction; ensuring that all of these things work in harmony with one another.

The ECS is also thought to play an important role in many diseases. Scientists have discovered for example a link between changes in ECS activity and illnesses such as rheumatoid arthritis, cancer, and neurogenerative disorders. Therefore, it has been suggested that the ECS is an effective means of restoring balance in the body, as well as providing patients with relief from symptoms arising from such diseases.

An important factor in the discussion of cannabinoid-based derivatives for medical conditions is that it is critical to consume products that aren’t isolated compounds, but rather those that have a full spectrum of cannabinoids and other naturally occurring active compounds in them, similar to the real plant.

Cannabis contains more than 500 different compounds, which include cannabinoids, terpenes, flavonoids, and omega fatty acids. Each strain of cannabis has a vast number of cannabinoids such as THC and CBD, as well as accompanying compounds which add to the synergistic effect of cannabis as a whole, in what’s known as the ‘entourage effect.’ Synthetic cannabinoids or isolated THC/CBD medications and derivatives that don’t contain any of the minor cannabinoids (CBN, CBG) or terpenes that are present in cannabis and hemp plants, tend to have a weaker therapeutic impact.

THC, for example, is responsible for the psychoactive effect, or the ‘high’ that is experienced when it is ingested. But it has also been found to effectively treat pain, muscle spasticity, glaucoma, insomnia, lack of appetite, nausea, and anxiety.

CBD, which is found in cannabis and hemp plants, is a non-psychoactive cannabinoid which is used to treat migraines, inflammation, seizures, IBS, depression, insomnia, and anxiety. More recently, the beneficial effects of topical CBD application to the skin have made it a buzzword in the beauty industry. CBD can also be extracted from hemp plants, which contain trace amounts of THC, meaning that hemp-derived CBD often doesn’t face the same regulatory hurdles that cannabis does.

While cannabinoids have been getting a lot of attention in the mainstream media of late, it’s been found that terpenes also have valuable therapeutic properties, including anti-inflammatory, antioxidant, and pain-relieving effects. Terpenes such as limonene have also been shown to exert anti-tumorigenic effects in a number of in vivo and in vitro systems, thus suggesting their potential use as chemotherapeutic agents for preventing or treating tumour growth.

Putting it all together

Radient, realising the benefits that its extraction and processing technology delivers in terms of scale, active compound recovery, and quality, is equipped with an in-house team of more than 30 scientists with extensive experience in the development of plant-based ingredients, supplements, and therapeutic formulas. The company is leveraging its manufacturing advantages, along with water-tight quality management systems based on decades of experience manufacturing for CPGs, to make products and ingredients that are unlike any other currently on the market – full spectrum formulations that can produce desired effects and therapeutic benefits similar to those achieved by the real plant.

Because of the precision of their downstream processing technology, Radient’s formulations can also be measured for exact strength and potency, with negligible cannabinoid degradation over time – in other words, their products have an extended shelf life. The company hopes to partner with medical companies looking to further study the therapeutic effects of medical cannabis, and is exploring opportunities to partake in clinical trials which would shine a light on alternative treatments and therapies for chronic illnesses including cancer, epilepsy, multiple sclerosis, AIDS, Chrohn’s, and arthritis to name just a few.

With the legalisation of medical cannabis spreading to more countries throughout Europe, Radient has chosen to set up its first non-Canadian extraction and processing facility in Germany. When complete this facility will process more than 280,000 kg of cannabis per year, and more than 2.8 million kg of hemp per year. The company has also set up an additional R&D laboratory facility near Lyon, France for additional analysis and formulation development.

With the commencement of its operations in Germany, Radient will further complement its existing Canadian facilities. Currently, Radient’s Canadian cannabis extraction facility based in Edmonton, Alberta has a throughput capacity of more than 56,000 kg/year of cannabis, with an additional extraction throughput capacity of 420,000 kg/year of hemp coming online in late 2019.

Due to overwhelming demand, Radient is also expanding its Canadian manufacturing facilities. By late 2020 the company will begin initial operations at its new expanded manufacturing facilities, which when completed will be processing an additional 280,000kg/year of cannabis and 2.8million kg/year of hemp in Canada. This will bring Radient’s total global annual throughput capacity to more than 600,000 kg/year of cannabis and more than 6 million kg/year of hemp.

Another important aspect of the company’s successful product development is the protection of its intellectual property. In 2018, Radient engaged a world class intellectual property and innovation consulting firm, and began executing on a plan to strategically protect and enhance their IP portfolio. So far, Radient has filed more than 58 provisional patent applications with the United States Patent & Trademark Office (USPTO) for technologies relating to:

Radient’s proprietary extraction and processing platform has evolved from more than 200 documented items of intellectual property including issued patents, patent applications, potential patents and Trade Secrets. Their IP programme has been strategically created and developed to support all key aspects of the cannabis business, and directly addresses the main demands of the market. Radient’s IP creation process began with determining the industry’s major needs, including:

Because Radient is evolving into a global manufacturer of premium quality cannabinoid formulations, ingredients, and products, in 2019 the company began the process of filing Patent Treaty Cooperation (PTC) applications with the World Intellectual Property Organization (WIPO), for acceptance in countries outside of North America, including but not limited to Canada, the USA, Australia and EU countries.

This article has also appeared in Health Europa Quarterly Issue 11, which is available to read now.