When the consultancy Armstrong & Associates (A&A) compiled its Top 25 freight forwarders at this time last year, one of the key takeaways was that mergers and acquisitions were going to play another big role in 2019.

What made that forecast especially prescient was DSV’s purchase of Panalpina this past May, making the new entity the world’s 3rd largest forwarder by revenue and placing it 4th on the current A&A rankings. DSV is now a rival for industry leaders Kuehne+Nagel and DHL Global Forwarding in the current marketplace, according to Richard Armstrong, A&A’s chairman.

“We were equally impressed by the leap made by C.H. Robinson from 13th last year to 9th in this year’s rankings,” says Armstrong. “This was primarily due to a surge in demand for ocean cargo—a particularly strong sector for this forwarder.”

So far, Armstrong remains skeptical about industry “outliers” like Freightos and Flexport making it into the rankings any time soon, as they both lack access to the warehousing and transport networks maintained by the Top 25. “These are two very strong digitized companies that we will keep an eye on, however,” he says. “Given the amount of attrition at the bottom of our list, there may be more room for new players to penetrate. CJ Logistics and NNR Global Logistics, for example, fell off our list this year and were replaced by Logwin and Mainfreight.” 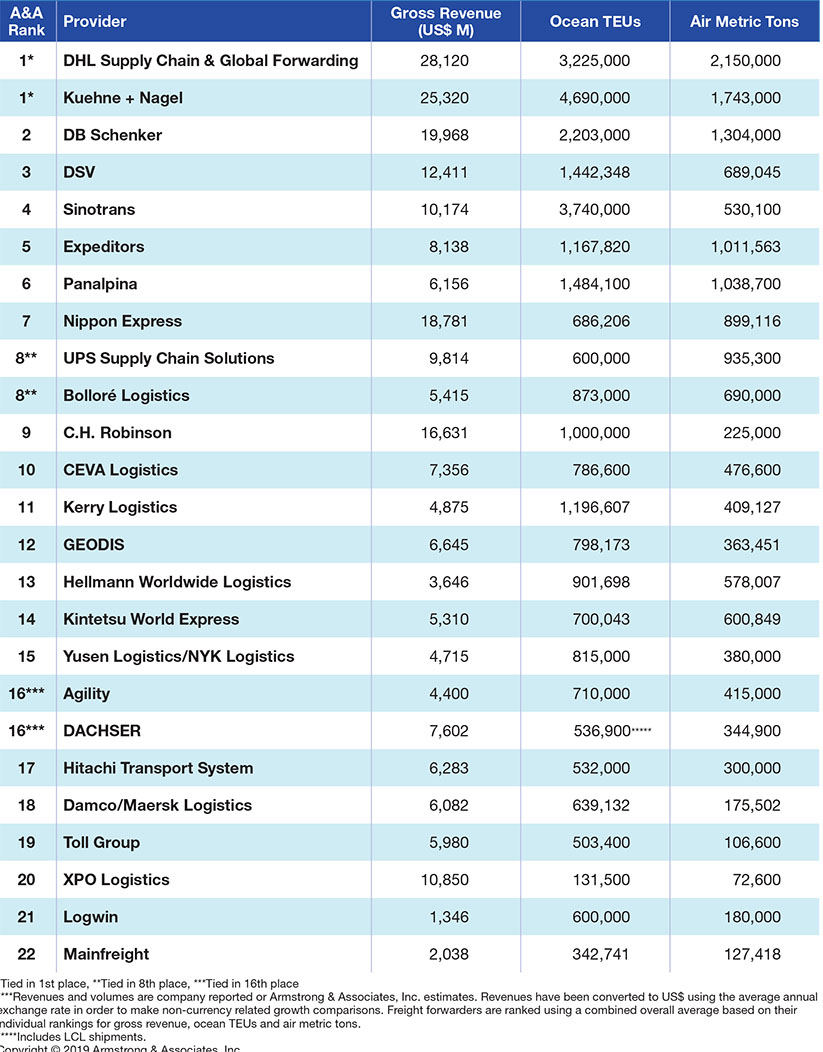 Some attrition notwithstanding, Cathy Morrow Roberson, president of the consultancy Logistics Trends & Insights, maintains that the forwarding market achieved good financial gains in 2018.

For example, Kuehne + Nagel and Panalpina each reported gross profits of 9.8% and 7.3% respectively, while DHL Forwarding Technology investments continued to focus on network and operations optimization. DHL Global Forwarding made a strong comeback from their “tech debacle” in 2015 and posted good revenue and gross profits for 2018: 3.8% and 3.9% respectively. Despite those financial gains, 2018 volumes declined for ocean and air, however.

“In our opinion, rankings of forwarders is considered more of an art than a precise science,” says Morrow Roberson. “And while we agree with Armstrong & Associates that DHL Global Freight Forwarding is a dominant player, we believe that Kuehne + Nagel surpassed DHL as the leader in this market.”

“The freight forwarding market is also concentrating more on the small- to medium-sized business segments,” says Morrow Roberson. “Several forwarders such as Agility have introduced online platforms and other services to focus on this growing segment. In the meantime, UPS and FedEx have both introduced fulfillment services, and Amazon is playing a bigger role in attracting more third-party sellers to their platform by offering logistics and freight forwarding services.”

This year, Morrow Roberson expects to see more emphasis on improving financials versus growing volumes. “Tech investments will continue,” she says, “as will appealing acquisitions. Meanwhile, niche solution providers such as perishables and healthcare will attract forwarders looking to expand their industry specific services.”

Since Armstrong & Associates compiled its “Top 25” forwarders rankings, Kuehne + Nagel has expanded its overland capabilities with the acquisition of Austrian SME Jöbstl. According to K+N, this move would benefit shippers seeking capacity into Eastern Europe and groupage services.

The outlook for the rest of the year is less certain for CH Robinson, however. According to CEO Bob Biesterfeld, “we expect the soft freight environment to continue through the balance of 2019.” One main reason is the company’s relative exposure to China, which may in view of further tariff action, become a weaker part of the global supply chain.

Meanwhile, Jens Bjørn Andersen, group CEO of DSV, tells shareholders that he’s pleased with the strong results for the second quarter of 2019.

“Global transport markets are soft, especially within airfreight, but DSV has managed to outgrow the market while still delivering market leading profitability,” says Bjørn Andersen. “We expect that the Panalpina transaction will close in the third quarter, and we look forward to combining two strong companies and leveraging our extensive networks and expertise to provide even stronger shipper offerings.”

Finally, adds Morrow Roberson, logistics providers committed to emerging markets in Latin America, Africa and the Middle East will be of interest as large forwarders look to lessen their reliance on larger trade lanes. “The trans-Pacific may see some softness due to the current trade war between China and the U.S.,” she concludes.

So, are rumors of yet more consolidation in the sector finally dying down? Not by a longshot says Nick Bailey, head of research for the London-based consultancy Transport Intelligence (Ti). He’s also the primary author of “The Global Freight Forwarding Report 2019” that posits that there will be more merger and acquisition activity in the future.

“The rationale is generally economies of scale or the need for greater exposure to global markets, either geographic or vertical,” says Bailey. “Another rationale, less loudly articulated, is a fear of being left behind.” Furthermore, he says there are indications that reasons for consolidation are changing, and that acquisitions which enhance end-to-end capability will become the new trend.

“Consider the acquisitions that helped create Panalpina’s perishables network or UPS’ pharmaceuticals offer, for example—smaller targets that added specific capability, assets, technology and expertise,” says Bailer, who adds that he believes that a related “end-to-end rationale” can be seen in CMA CGM’s acquisition of CEVA and Maersk’s plans to have 50% of its earnings come from inland logistics services.

Trade concerns are already weighing heavily on U.S. business sentiment, say analysts for the global trade intelligence firm Panjiva. They add “more of the same” is possible with the latest round of proposed tariff increases from the Trump administration.

The implications for freight forwarders are clear when one considers that export order expectations in the latest ISM survey of American businesses showed a reading of 48.1 in the July survey. Readings below 50 indicate expected contraction. “This is down from 50.5 a month earlier,” says Panjiva research director Chris Rogers, “marking the worst result since February 2016. Today, companies increasingly see tariffs as a way of life.”

Similar now to China and Germany, the U.S. has a negative outlook for exports. This news comes as the technical trade recession that began in May—with two consecutive three-month year-over-year drops in exports—continued through June.

According to Panjiva, 20 out of 24 countries that have reported June export data show a decline, with an arithmetic average of a 7.7% year over year slide.

The Ti report also addresses the “digitization” of the industry with several keen observations. “The adoption of digital forwarding platforms is already significant, with 49% of the shipper respondents to our survey saying they had or do use a mix of online marketplaces, booking platforms and digital forwarders,” says Bailey. That number was higher than expected, he adds, as was the 30.5% of respondents that said such platforms represent an important part of their overall shipping strategy.

“Prior to undertaking the research, the impression we got from speaking to major forwarders was that they felt adoption was low, and that the platforms weren’t mature or sophisticated enough to have really gained traction,” says Bailey. “This is only half right. The notion that digital forwarding platforms aren’t mature enough or offering sophisticated services to be a competitive ‘threat’ appears to be holding for now, but that hasn’t translated to a lack of traction in the platforms’ core quotation and booking offer.”

Despite this, Ti does not see a future where the top global forwarders are replaced by digital-only forwarding start-ups and disruptors. “The digital forwarding platforms are, though, a catalyst for change, and established traditional forwarders have to take notice of the lessons they provide,” says Bailey. “Forwarders that can’t offer the levels of visibility, easy quotation and booking, and levels of customer services shippers want and demand will rapidly lose customers to those that can.”

Patrick Burnson is executive editor for Logistics Management and Supply Chain Management Review magazines and web sites. Patrick is a widely-published writer and editor who has spent most of his career covering international trade, global logistics, and supply chain management. He lives and works in San Francisco, providing readers with a Pacific Rim perspective on industry trends and forecasts. You can reach him directly at [email protected]