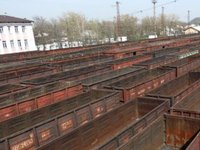 Ukraine still prefers transporting transit cargo from the Russian Federation in large volumes to the detriment of Ukrainian companies, in particular, this concerns iron ore, mining enterprise of the country, which products are shipped with delay, have said.

“Despite the Saturday meeting, at which it was decided to reduce the volume of transit cargo passing through SOE Pivdenny martime merchandise port in December from 240,000 tonnes to 40,000 tonnes, this morning there is again a tendency to increase transit cargo through the Pivdenny port in December, thanks to a decrease in monthly volumes of shipment of pellets from PJSC Poltava Mining,” the Kremenchuk newspaper reported, quoting a letter from the Poltava Mining leadership to Infrastructure Minister Vladyslav Krykliy.

At the same time, the newspaper said that the largest exporter of Ukraine – Poltava Mining – asks the Infrastructure Minister to find out why Ukrainian infrastructure is still inaccessible to domestic manufacturers.

Additionally, in December, two plans were announced by Poltava Mining with a total volume of 102,480 tonnes, which have not yet been agreed. At the same time, as of December 5, Ukrzaliznytsia additionally announced plans for Russian transit cargo of 200,000 tonnes through the Pivdenny port in December.

Poltava Mining calls on the Infrastructure Ministry to decide which transportation to give preference to: transit cargo or cargo of the largest exporter of Ukraine – PJSC Poltava Mining.

As it was reported in November in a letter from the heads of the Northern, Southern, Inhulets, Central and Poltava mining and processing enterprises to the Infrastructure Ministry and the Ministry of Economic Development, Trade and Agriculture that JSC Ukrzaliznytsia increased the transit of iron ore from the Russian Federation to the detriment of the transportation of similar Ukrainian products.