Officials in Dauphin and Lebanon counties will vote this week on whether to approve the zoning for a nearly 1-million square foot warehouse proposed for East Hanover Township.

According to a copy of the application sent in by Hanover Logistics, LLC., the 963,790-square-foot warehouse and 72.7-acre site would mostly be in the Dauphin County side of East Hanover Township. Over 17 acres of the proposed facility would be in Lebanon County and would mainly consist of parking spaces, according to East Hanover Township of Lebanon County’s website.

For comparison, the Farm Show Complex in Harrisburg is roughly 1 million square feet.

Charles Courtney, who is representing Hanover Logistics, said Tuesday that no portion of any building would be in Lebanon County. The plans call for two buildings on the property, he said, one smaller and another midsize. 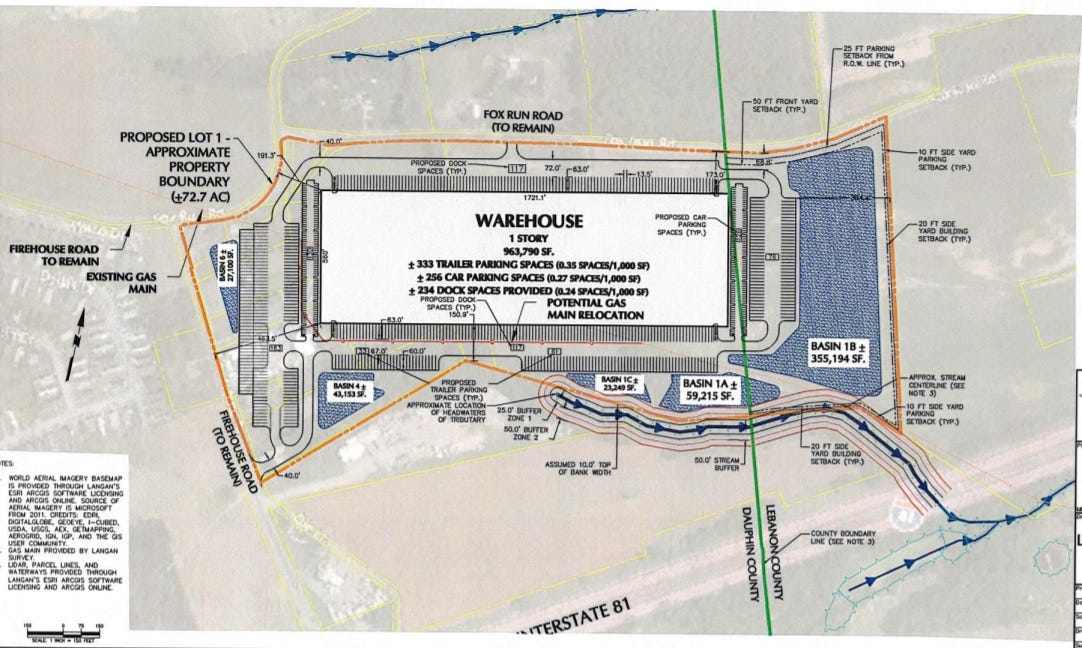 A plan for a proposed warehouse in East Hanover Township. (Photo: Submitted)

The warehouse would be located just off Interstate 81, according to the application, near the intersection of Fox Run Road and Firehouse Road. According to a satellite image from Google Maps, the site of the proposed warehouse is close to a neighborhood off of Firehouse Road.

Courtney noted that being in two municipalities, the parcel is divided into two sections that are zoned in completely different ways. Part of the site in Dauphin County is in an “industrial zone” where warehousing is permitted by conditional use, according to the township’s website.

The portion in Lebanon County is in an agricultural zoning district, according to the township, which means the company has to get a variance approved from the zoning board to allow them to develop the land as currently planned.

“There’s a universal desire to preserve agricultural land,” Courtney said, “But you want to preserve it in the right places, and here we have a property that is already partially industrial.”

The Board of Supervisors for East Hanover Township, Dauphin County, will vote on the issue at a public meeting on Tuesday, Nov. 19 at 7:30 p.m.

The East Hanover Township Zoning Hearing Board will vote on the proposed variance Wednesday, Nov. 20 at at 7 p.m.